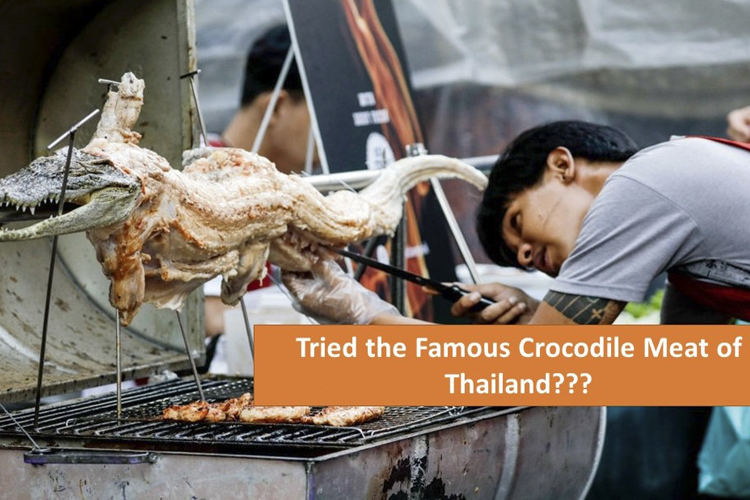 There’s nothing new that crocodiles have been used for their skin to make shoes and handbags. But the raging craze for crocodile meat has now become a delicacy in some countries and Thailand doesn’t seem to shy away from its peculiar tasty exotic menu.

Umm, it may not be so surprising, considering we Asians can eat pretty much everything that walks on earth and is edible. However, what may surprise you is that Asians are not the only ones eating crocodiles. Crocodile meat is also very popular in Southern USA, Africa, Central America and Australia. In Thailand, Asiatique is the place to be if you don’t want to miss out on the action and the crowd is crazy about this bizarre delicacy. I happen to be around the area and walked past the restaurant a couple of times but failed to notice. Thanks to the massive crowd. So, I had to wait until the scene gets clearer.

There it was, a gigantic croc on the grill, dripping with sauce and staring right into my soul. I must say, it was quite a dreadful sight and all I had in my head thinking; Should I do this? Do I have to try a crocodile meat? or Can I eat a crocodile meat? I was going all bonkers with every kind of vivid imagination.

Finally, I let my curiosity win and there I was paying for a plate of a grilled crocodile at a restaurant in Thailand for 200 baht. Ah, quite an expensive thrill for a portion of Thai street food (If you are in Thailand, you must try other Thai delicacies like Pad Thai – Thailand’s most popular street food). The crocodile meat was served with spicy sauce, some lettuce and grilled onions. Though deciding on eating was one task and now eating was another.

Taking the first bite of the grilled crocodile meat was the one that took the most courage and the daredevil approach. I have always been finicky about reptiles, particularly lizards. Although not from the same family, crocodiles are still the giant, slimy lizards to me. So, there I was munching onto it and now all I could imagine woahhh crocodile meat tastes just like chicken, a bit chewier but didn’t taste disgusting or crocky.

I guess crocodiles might just become the best meat for a perfect barbeque after all.

Want to know about Thai food culture or another Thai Delicacy Miam Kham? Click on these links!