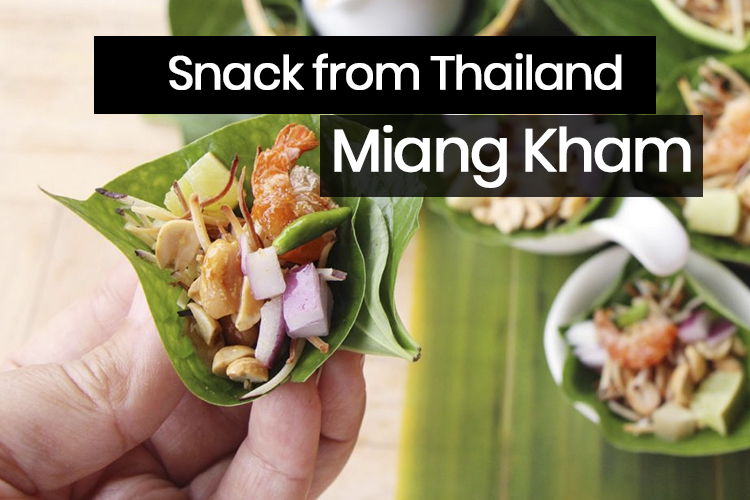 Miang Kham is a snack from Thailand and Laos, which is a traditional Asian snack. This Thai dish was introduced in the Siamese court during the reign of King Rama V by the princess Dara Rasmi.

The origin of this Thai snack food was in the northern part of Thailand. It was initially made by using the pickled tea leaves known as miang in the north of the Thai language. This dish was also mentioned in the Epic of the verse of foods, a book which was penned by King Rama ii. Miang Kham in Thailand was usually gorged upon when there were social gatherings. The dish later then became popular in the central region of Thailand. Miang Kham is traditionally eaten when during the rainy season in Thailand, the reason behind this is that the leaves are known as Cha plus are available abundantly. Moreover, during the rainy season, the teal grows its leaves and its shoots.

In the capital of Laos, Vientiane, the dish Miang is often cooked in cabbage leaves known as Kaalampii or lettuce leaves. Other leaves can also be used alternatively like spinach etc.

There is also a variation of this dish, which is known as Miang pla, which includes deep-fried fish, along with the standard ingredients that are involved.

Moreover, in the Thai royal cuisine, in the central part of Thailand. An alternate wrap of this dish was adopted to represent and show the beautiful and social status like the Miang Kreep Bua or Miang Kham Bua Lhuang

As you all know by now that Mian Kham Bua is a traditional Siamese snack dish that was originated in the central part of Thailand and is eaten with friends and family. But what you didn’t know is that Miang Kham BuaLhuand is actually lotus petals that are wrapped as a bite-sized appetizer is consumed in between meals. As the name suggests, Miang Kham means one bite-size wrap. Miang means (snack packed in piper Sarmentousm leaves, and Kham says one bit in Thailand. Also, this dish can be covered in many kinds of things like Piper Sarmentosum and also pickled teal leaves that are originated in the northern part of Thailand.

The primary ingredient Lotus is something that is perceived to be an offering to the monks or buddha. But what a lot of people are not aware of is that the lotus petal, if eaten, is actually very beneficial for our body. Its high in fibre, so it works as detoxifying and the nourishment of the health (Consuming red wine in moderation is beneficial for health, skin & weight loss. Click to know how!) Lotus leaves can also be cooked as side dishes with ingredients like Miang Kham Bua Lhuang, shallots, gingers, chili peppers, garlic, limes, coconut sugar. This traditional Thai snack is perfect for health. Click to know other Thai dishes good for immunity.

While making this dish and before wrapping the filled leaves, they are topped with palm syrup or sugar cane syrup. This syrup is often cooked in with lemongrass, galangal, ginger, and fish sauce.

This one-bite appetizer has all the bold Thai flavours in it like the spicy ginger, the Thai chilis, the sour lime segments, the nutty roasted peanuts, and coconut. It also has a sweet and salty shrimp-based sauce, which is all wrapped together in the leaf, which is slightly bitter. It truly is an appetizer and does what it is meant to do, which stimulates your taste buds and will make you ask for more.

Though Miang Kham can be made with lettuce leaves or Chinese broccoli leaves. But the taste doesn’t remain to be the same as it does with wild pepper leaves. These leaves are tender and fresh, and moreover, they impart a subtle yet spicy and additionally a bitter flavor into the dish

For making the sauce, start by roasting the shrimp paste. Then spread a thick layer onto the surface of the banana leaf. Fold the leaf into the package and then place it on the over for approximately 10 minutes at 350 degrees. Once it’s done that the banana leaf that is charred. The foil can be used if you don’t have banana leaves.

While your shrimp paste is getting roasted, cut the ginger, the galangal, the shallots, and lemongrass into small pieces. Then roast these herbs by placing them into a pan over medium heat on the stove, then stir it occasionally until they are dried out and toasted.

Then place these roasted herbs in mortar pestle and the pound it until the coarse paste is formed. Then further add the roasted shrimp paste and then continue to pound it till the paste is smooth.

Then in the small saucepan, and then start heating the paste, which has been prepared by you with the fish sauce and the palm sugar over the medium heat. Further, continue to cook it until; a slightly sticky sauce is formed. If you think, it is becoming too sticky start adding water into it so that it can be thinned.

Now that your sauce is ready to pour some chopped and toasted peanuts into it and the toasted coconut flakes.

The first and foremost step is to wash the wild pepper leaves and then pat dry them.

Then prepare the peanuts, coconuts, and the dried shrimps by roasting all of them separately in the pan, which is kept at medium heat. Keep one thing in mind, and that is, you need to use raw peanuts and coconut flakes that are unsweetened for the best results. Now remove these ingredients from the pan after they are toasted and let them cool.

Now prepare the fresh ingredients. For this, you need to slice everything into small and bit sized pieces. You can thinly slice the peppers, and the lime can be sliced into wedges to keep the sin of the lime intact.

How to eat Miang Kham?

For eating Miang Kham, you need to take one pepper lead and then spread a dollop of sauce into the leaf in the middle. Then add the rest of the ingredients that have been toasted onto the leaves. Wrap them, so they don’t fall apart, then pop it into your mouth. Your bundle of fresh flavour is ready to hijack your taste buds.

5 Things to Do in Chiang Mai