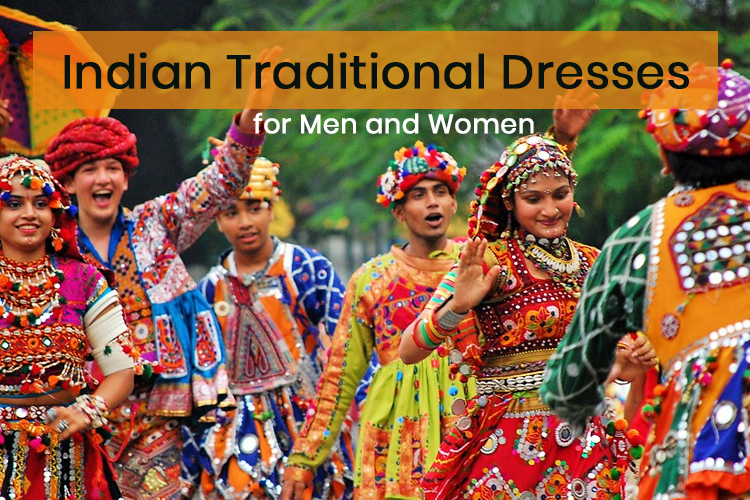 “The Indian way of life provides the vision of the natural, real way of life. We veil ourselves with unnatural masks. On the face of India are the tender expressions which carry the mark of the Creator’s hand.”

Known for its unity in diversity all around the globe, India is a land of varied culture, customs, geography, climate, and costumes too. For reasons like climate, traditions, and culture, both men and women in the different corners of the country wear different types of clothes that they call their traditional attire. It is either the fabric, or a particular design, or the style of wearing the dress, etc. that distinguish one attire from the other. There are 29 states and seven union territories in India and almost every state has its own traditional attire. In this article, we have tried to enlist the different Indian traditional dresses for men and women.

The north Indian states include Haryana, Himachal Pradesh, Jammu and Kashmir, Punjab, Uttarakhand, Uttar Pradesh, and the union territories of Chandigarh and Delhi. In Jammu and Kashmir, women wear colorful Pherans (Phyaran) and Shawls that are unique due to their intricate embroidery, bright colors, and brocade styles. For the bottom, women and sometimes men too wear poots that look like gowns. Women cover their heads with beautifully embroidered scarves. Kashmiri men are also found wearing Goucha that is a long robe made of pure wool that is tightened at the waist. In Haryana, women wear short Ghaghras, that look like skirts, with a Kurti on top. They cover their heads with colorful Chunris that look like scarves. Men wear dhoti and kurta and tie a pagri (turban) around their head. In Himachal, men and women mostly wear woolen clothes due to the cold weather. It is the colorful caps that stand out in their attire.

The traditional attire of almost all South Indian states is almost the same. The women wear sarees, while men wear dhoti/lungi and kurta or shirts on top. The traditional for women in Kerala is a white-colored silk sari with a broad golden zari border. And men wear lungis at the bottom and a shirt or short Kurta on top. On certain special occasions like a festival or wedding, men wear white-colored lungis with a golden border that are known as Mundu/Neriathu. In the remaining parts of South India that includes Andhra Pradesh, Karnataka, and Tamil Nadu, women wear sarees of various color combinations, which mostly include bright colors, and the fabrics mostly include silk, cotton, and chiffon. Mean wear dhoti and kurta.

The states that complete West India includesGoa, Maharashtra, Gujarat, and the union territories of Daman and Diu and Dadra and Nagar Haveli. Rajasthan, that lies on the northwest part of India is also included in the western region. Rajasthani attire is primarily known for its bright colors, beautiful patterns, and the amazing bead, mirror, and stone-work on them. The women primarily wear Ghaghra-Cholis and Bandhini tie-n-dye sarees.

Women also cover their heads with pretty dupattas/odnis that also have intricate detailing work on them. Traditional attire for men includes Angrakha, dhoti, Banda, Poti, Dhabla, Bugatari, and Pachewara and Bugatari. In certain areas of Rajasthan, men also wear dhotis. Men also tie safa around the head. It is a kind of turban that is died very differently. The traditional attire of Haryana includes Chaniyo choli for women. Chaniyo is a multicolored petticoat that has embroidered glass pieces on it, while choli is a colored piece of cloth that works as the top. The traditional attire for men includes Chrono and Kediyu, which is the short and top respectively.

In Maharashtra, men wear a Dhoti and shirt along with a headgear that is called a Pheta or r Rumal. The traditional dress for Maharashtrian ladies is a saree, known as Lugade. The style of draping is very different and this traditional attire must accompany a nose pin, known as nathni.

The states that make up the whole of East India include Bihar, West Bengal, Orissa, and Jharkhand. While the north-eastern states include Assam, Mizoram, Meghalaya, etc. The traditional dress for women in West Bengal includes saree, while for men, it is dhoti-kurta or kurta pajama. In Assam too, women and men wear the same kinds of clothes like West Bengal, however, it is the fabric that distinguishes one from another. Assam is famous for its beautiful mekhola-chador, which is a three-piece dress that is worn like a saree. Manipuri women wear Innaphi the shawl, Phanek, a wrap-around, and Sarong, which is a skirt.

While westernization has brought about a change in the style of clothing in all parts of India, people still wear these traditional clothes on various occasions like weddings, festivals, etc. After all, it is these little things that keep us grounded to our culture and tradition.
Images Courtesy @Pinterest