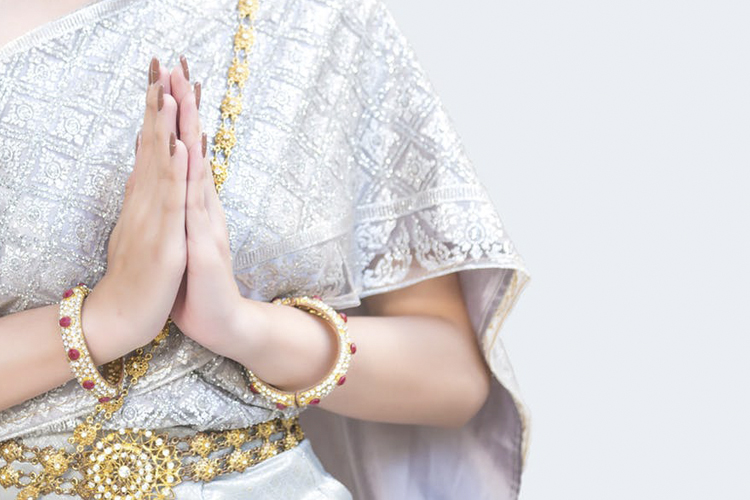 Indian Wedding are very colorful, full of music, dance great food and most importantly lots of traditions. Solah Shringar (sixteen adornments) of a married woman (equity to goddess Laxmi) is something that makes the bride look beautiful as well as carries many traditional sentiments and scientific rationality too. The Solha Shringar are then worn by the married woman on various auspicious occasions and festivities. Karwa Chauth is an occasion wherein, the married woman prays for longevity of her husband’s life. But the festival is not just restricted to fasting and puja but also dressing up. Nowadays, married woman wears all the Solah Shringar giving a contemporary or modern twist.

Traditionally, a red dot but nowdays many fancy bindis are available in market. Woman wear a bindi inbetween the two brows on the forehead. It is believed that wearning bindi brings prosperity and good look to the brides/woman.  Woman now generally waers sticker bindis with designs and colours that matches their outfit.

Being the center of the nerve system, bindi helps to keep the mental balance of the woman. It energizes her kundali and helps in focusing better in her work.

Red powder/ sindoor is mark in Hindu tradition that the woman is married. For the first time the sindoor is put by the husband during the marriage ceremony. Adorned on the parting hair, sindoor is nowadays available both in powder and liquid.

Sindoor powder carries components such as mercury, turmeric and lime that acts as a cooling agent. Again, keeping her calm and cool headed. Since woman after marriage have to take care of multiple responsibilities, especially in Indian Culture, therefore, it is important to ensure their mental calmness and peace.

Beautiful designed matha patti or maang tikkas or worn by woman on the parting hairs at the forehead. It enhances the beauty of the bride and gives a very exotic look.

Wearing maang tikka on the forehead controls the heat level of the body. The point at which the chakra falls is the Ajna Chakra, which signifies the holy union of husband and wife.

To enhance the eyes, kajal is one of the most commonly cosmetic used. It makes looks eyes bigger and shinier. Earlier the kajal was taken from burnt earthen lamps but these days kajal sticks are readily available.

It simply removes unwanted dust articles and keeps the eyes cool all day. But it is important to remove kajal before going to bed.

A around ring worn on the left side of the nose is another beautiful ornament worn by married women. The ring may be of gold or silver with beads or kundans decorating the ring.  Nath makes the face of the woman look more attractive and different from rest.

Piercing on the left side of the nose of a woman energizes her reproductive organs and also helps her to bear the menstrual pains.

A Chain of black beads is what a mangalsutra is made of. In some tradition even, gold chains with pendants or long necklaces are wear which is again a symbol of a woman’s marriage.

Wearing a chain of black beads controls the blood circulation level of the woman.

The overlook look of the lady is incomplete without a pair of earrings. Complimented with Maang Tikka and Nath, earrings are also available in all sizes and designs.

Ears have many important acupuncture points, which when pierced, provides many health benefits. For woman it helps them to tackle with menstrual problems.

Henna or Indian tattoo is a traditional act, wherein on festivities and auspicious occasions, woman especially the married ones put Mehndi on their hands and feet. It’s a piece of art which involves creativity making the hands and feet look stunning and attractive.

Henna is an excellent cooling agent and thus keeps the body of the woman cool. Also it has many medicinal components which helps in healing any wounds or cuts.

Mark of fortune and prosperity, bangles are the most commonly worn ornament by Indian women. Colorful and designer, bangles are in glass, metals, gold, etc.

The sounds of the bangles have a soothing effect on the mind. Wearing it around the wrist strengthens bone muscles, making them ready to face all the physical challenges.

To add beauty to the arms, armlets are worn on both sides of the arms. The ornament is gain, can be worn in gold, metal, kundan, etc.

Maintaining the blood flow of the body, the armlet acts as a resistance to make the body feel comfortable.

Married man wears the wedding ring on the right hand while the woman wears on the left-hand ring finger. The ring is again a symbol that that the individual is married.

Accessorizing the hair with flowers or jewels, makes the hair look striking. Traditionally, jasmine flowers were worn on the juda or braid, as the flower has a very long-lasting fragrance.

To attract other, jasmine smell is one of the best fragrances that is naturally available. Also, it keeps the woman fresh all-day.

To add grace to the saree or traditional attire, the waistband or kamarnbandh is worn. It also helps in keeping the clothes in place.

Controls belly fat and menstrual pain and therefore worn by woman as they have to face both challenges.

Bunch of chiming beads worn around the ankle adds grace and produces very soothing sound. Anklets are generally made of silver or metal and not gold, as gold is considered to be auspicious. Bichuas on the other hand are worn on the second finger of the feet again in silver and not gold.

Since ancient times. Fragrance have played a very important role to attract people and feel fresh.

Scientifically, a good fragrance attracts the opposite gender and thus helps to attract people around. Also, it pacifies the mind and brain.

Outfit depends upon the traditional lineage of the woman or the husband.  It could be anything- a saree, a suit, lehenga, etc.

No scientific reason but yes, the color red is symbol of marriage, union and love. Therefore, the married woman usually wears more bright colors and do not wears white and black as per Hindu Tradition.

We Hope All the Ladies this Karwa Chauth Adorns all their Solha Shringar and look absolutely stunning.