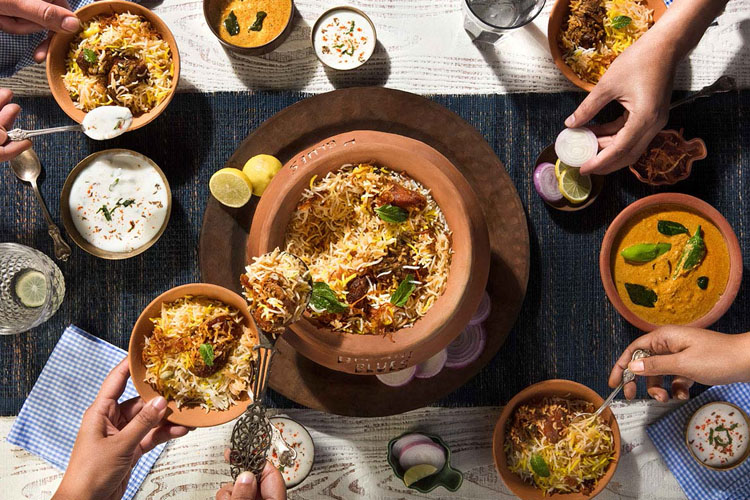 India has so much to offer on its culinary platter, but the one dish Indians love indulging in is Biryani. In this article, you will find how biryani came into being, different kinds of Biryani and the recipe of Lucknowi biryani in case you wish to try your hand at this Royal Indian Dish.

Biryani is an evergreen savoury mixed with the herbal warm aromatic spices, makes every foodie drooling. With distinctive styles of biryanis, one is spoilt for options when it comes to experiencing this melting pot of flavours. The perfect biryani calls for meticulously measured ingredients, roasting of spices (my favourite part when it comes to cooking), marinating, slow-cooking and practicing technique. Meat or chicken is often the key ingredient, though in some coastal varieties, fish, prawns, and crabs are also used.
The origins of biryani have multiple theories, some claim biryani hails from Persia and came to India with the Mughals, whereas some believe Timur brought it from Kazakhstan, while some say it has Indian origins.

The most popular story traces Biryani from Mumtaz Mahal, Shah Jahan’s beautiful queen who inspired The Taj Mahal.
Once Mumtaz visited the army barracks and found the Mughal soldiers looking undernourished. She asked the chef to prepare a special dish that combined meat and rice which was fried in ghee, without washing, to give it a nutty flavour and prevent it from clumping. Meat, aromatic spices, and saffron were added to it before cooking the mix over a wood fire to provide balanced nutrition to the soldiers – and the result was biryani of course!

My bows for Lucknowi Biryani….
Lucknowi Biryani is made from cashew paste, saffron, curd, star anise and mace. Margination is key element. The longer you marinate the meat, the better is the taste of the biryani. In Lucknowi biryani or Awadhi Biryani, the meat is cooked on slow fire till it is almost done. While buying meat for your biryani, you should ensure that the mutton is fresh and the pieces are small. Lucknowi Biryani biryani tastes best with goat meat.

Recipe of Lucknowi Biryani: If you wish to prepare…

Another Royal Indian dish, tracing from Rajasthan & its royal age, know the story of Royal Rajasthani Thali. If you are fond of Rajasthani culture, you must visit a place in India called, chokhi Dhani and see through your eyes, the rich culture of Rajasthan.

Thai Cuisines with an Indian Touch

Thai & Indian Cuisine: Is There Any Similarity Between The Two