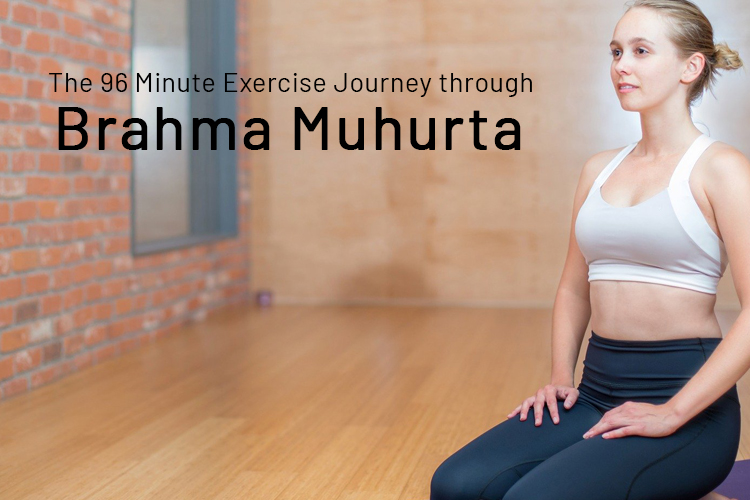 Let us assume that the sun rise is clocked at 6 am in the morning. Therefore, the first muhurta would start at 4.24 Am and would finish it 5,12 am. Then the second muhurta would last till 6 Am where one would start seeing the sunrise, signaling the end of the Muhurta. As per Hinduism, the Bramha muhurta is the ideal time to engage in Yoga exercises, or in religious worship. This would also include continues meditation, which will have a much greater effect than any other ordinary day. This leads us to question on what is the specialty of this time interval and its effects, which are explained in the passage found below.

The religious minded Hindus have always believed that the Brahma Muhurta time, is when the mind is kept fresh, and would absorb fresh knowledge and perceive it too. Therefore, a walking exercise, which starts in the first muhurta ends only after 96 minutes at the rise of the Sun. The theory is further propounded by the Ayurvedic experts, that the walking undertaken during this period, chanting or murmuring the lord’s name has manifold health benefits, in comparison with the normal days walk given the same time interval. the result of all these, is that the person who follows this routine is blessed eternally with sound health.

It is no strange news, that people have to go about their pursuits in life, every day, which may result in others being benefitted more. Therefore, the choice becomes none at that point of the day. But, the Bhrama muharta time, is where they can chase their own pursuits towards the strengthening of their religious beliefs and optimizing their exercise routine, which result in wonderful benefits to their mind, body & soul. Therefore, one needs to create the special time and the Brahma Muhurta time is heralded as the best.

All of us know, that oxygen is there in the atmosphere. But this oxygen tends to get contaminated as the day progresses with all kinds of carbon emission fro motor vehicles, toxic air from factories. The Brahma Muhurta time is best time for inhaling oxygen, which is purest in its form. This is called nascent oxygen or in other words. it mixes easily with the blood, and thus could be called “Oxy Hemoglobin”. Therefore, this is the best result one could hope for, when exercising at the Brahma Muhurta time, which would lead to multiple health benefits, which are briefly described below.

Yoga or walking stretches’ every muscle and nerves in your body. Doing it through Brahma muhurta time, would have more benefits, thanks to the pure oxygen factor and there would be fast relief to cramps, body pain etc.

Since the blood circulation is on a high, exercising during the Brahma Muhurta time ,the chances are that the adrenalin gets pumped better, which would lead to energy levels never experienced before.

An Immune system, is through which all the radical bacteria can be kept at bay. With good blood circulation, immunity is at its high. This would lead to a non-disease life.

Ideal Yoga exercises to be done during Bramha Muhurtha time:

Swimming is an ideal exercise and the best, as it calls for all exertions of the body. A swim during the second muhurta is ideal .

Who should not practice exercising during Brahma Muhurta time:

Even though it is a religious belief, the facts are undisputable. The body and mind are enhanced in the process, and the power of concentration is also found to increase. Ideally, a healthy person, who has followed the rituals in his yester years of the Muhurta , should practice this.

Read also the yoga exercises to do to cure or prevent Thyroid disorder, Yoga postures (asanas) to cure diabetes. If you are visiting India and are a Yoga fan, don’t miss to check out these best yoga hubs in India.