The second day PBD began with a lot of commotion and confusion. Most of the Indian diaspora was left unattended and denied entry into the Grand Hall of Brilliant Convention Centre, where the conference is being held. They were asked to watch the programme only on the big screens outside, which agitated most of them as they had travelled thousands of miles to attend the event.

The Chief Minister of Madhya Pradesh, Shivraj Singh Chouhan, claimed even though the space was inadequate to accommodate everyone, there was no shortage of love and affection in his heart. However, after today’s ruckus, most of the Indian diaspora felt otherwise.

PM Modi at the Event

Prime Minister Narendra Modi said that after four years, the PBD has returned in all its glory and grandeur. He praised Indore for being a wonderful city and remarked that the city has a distinct identity in the field of cleanliness.

Mentioning the importance of the previous generations of the Indian diaspora, he suggested that there must be a systematic methodology to document their lives as an authentic historic journey.

Talking about the current generation of the Indian diaspora, PM Modi added that the former had been indispensable in developing the nation’s image worldwide. He said a country and its ideals live in its people’s hearts. Wherever you live, carry India with you. 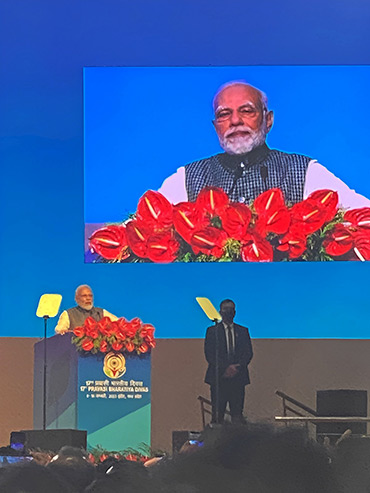 Modi added that Indore has excellent cuisines and recommended that the people enjoy the city’s beauty. He also spoke about the divine and grand expansion of Mahakal Mahalok.

The Future of India

Modi pointed out that India is moving towards becoming a cashless economy. The world is pleasantly surprised about the fact that 40% of real-time transactions take place digitally in the country.

Today, India has an opportunity to become the skill capital and knowledge centre of the world. Our youth have skills, values, passion and honesty to do good work.

India a Reliable Partner in Regional and Global Matters

Special Guest, Chandrikapersad “Chan” Santokhi, President of Suriname extending his condolence to PM Modi on his mother’s demise, remarked that mother and motherland are greater than heaven.

He added that the 17th PBD conference would help increase the cooperation between the two countries.

Santokhi appreciated India’s increased global visibility and expressed that “India has proven to be a reliable partner in regional and global matters… we have the opportunity to advance the voices of the global south”.

The Chief Guest of PBD, Dr Mohamed Irfaan Ali, expressed his gratitude towards the Indian Prime Minister and Madhya Pradesh’s Chief Minister for the cordial invitation.

He stated the historical importance of PBD and took us down the memory lane when one of the greatest Pravasis, Mohandas Karamchand Gandhi, returned to India from South Africa on 9th January, 1915.

Dr Ali paid tribute to Mahatma Gandhi and highlighted his role in liberating the country from the British Raj. 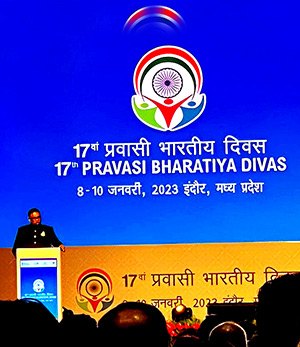 He also praised Modi’s Sabka Saath, Sabka Vikas and Sabka Vishwas and added that India is number one in the world in nurturing talents. We are learning a lot from the programmes India is running for expatriates.

The Indo Thai News team spoke to the Indian diaspora to bring you the ground report.

Most of them were unhappy with the poorly managed event. They felt that the 17th PBD was marred by indifference towards the Indian diaspora. They observed that this year’s PBD paled compared to the much better-managed 2019 PBD held in Varanasi, Uttar Pradesh.