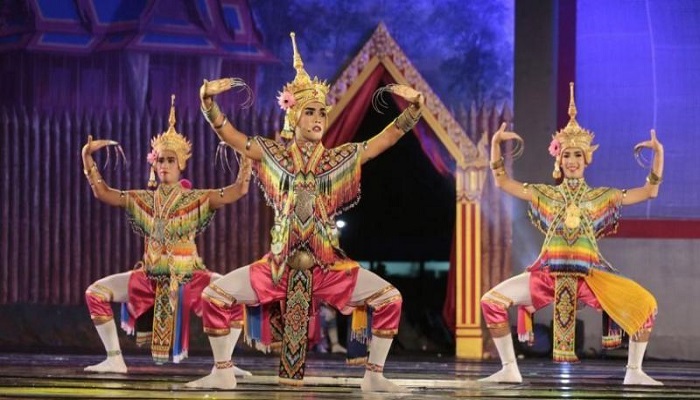 The ‘Nora’ form of dance theatre and improvisational singing of Southern Thailand has been inscribed on UNESCO’s Representative List of the Intangible Cultural Heritage of Humanity.

Nora and Khon are among Thailand’s most significant performing arts. The Department of Cultural Promotion under the Ministry of Culture in 2009 declared Khon as the national Intangible Cultural Heritage.

UNESCO’s inscription of Nora on the Representative List of the Intangible Cultural Heritage of Humanity reads:

“Nora is a lively and acrobatic form of dance theatre and improvisational singing from Southern Thailand. Performances normally include a long oral invocation, followed by a presentation by a lead character who dances with vigorous and elaborate movements of the legs, arms, and fingers.

The performances are usually based on stories about the former lives of Buddha or about legendary heroes. An ensemble plays highly rhythmic and fast-paced music with a traditional Southern oboe providing the melody and strong rhythms produced by drums, gongs, cymbals, and wooden clappers.

The main Nora performers – whether male or female – wear colourful costumes with crowns or headdresses, beads, bird-like wings tied around the waist, ornate scarves, and swan tails that give them a bird-like appearance. Performers also wear long, metallic fingernails that curl out from the fingertips.

Nora is a community-based practice with deep cultural and social significance for the people of Southern Thailand. Performances use regional dialects, music, and literature to reinforce cultural life and social bonds among local people.

Over 500 years old, Nora is performed in local community centres and at temple fairs and cultural events, and is passed on through training by masters in homes, community organisations and educational institutions.”

Source: The Tourism Authority of Thailand