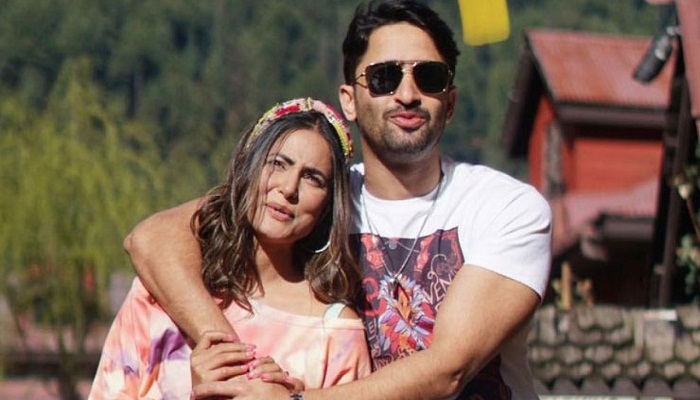 Popular TV stars Hina Khan and Shaheer Sheikh, who created ripples on social media with their sizzling chemistry in ‘Baarish Ban Jaana’, are all set to work together in a new music video. Hina took to social media to share BTS photos from the sets of the music video and reveal the title.

Khan and Sheikh will be seen romancing each other in ‘Mohabbat Hai’, which will be directed by none other than Mohit Suri. While Hina was seen in shimmery outfit, Shaheer donned a white shirt and black trouser.

In the second photo, the duo can be seen gazing into each other’s eyes. The ‘Kasautii Zindagii Kay 2’ actress captioned her post, “Only for your eyes. ShaHina is Back with a Bang. @shaheernsheikh #MohabbatHai coming soon. Directed by the very talented @mohitsuri. Can anyone spot him behind?”

Fans have flooded the comments section with their messages, expressing excitement on seeing ‘ShaHina’ together in another project.

The ‘Yeh Rishta Kya Kehlata Hai’ actress immediately rushed to Mumbai after she came to know about her father’s untimely death. Her dad Aslam Khan passed away on April 20 after suffering a cardiac arrest.

Talking about Shaheer Sheikh, the ‘Navya’ star is on a roll these days as he is shooting non-stop for his projects. He is winning hearts with his performance as Dev in ‘Kuch Rang Pyar Ke Aise Bhi 3’, which airs on Sony TV. The romantic drama also stars Erica Fernandes and Supriya Pilgaonkar in key roles.