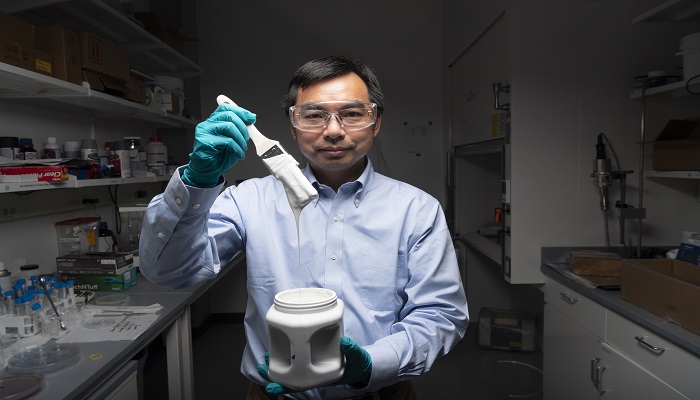 At Purdue University scientists had created the World’s whitest paint which could in time lessen or even stop the demand for air conditioning as stated by the paint inventors themselves.

The paint is currently being listed in the Guinness World records book as the whitest paint ever made.

According to the statement of Professor Xiulin Ruan of Mechanical Engineering at Purdue University, when they began the project approximately seven years ago they were thinking of saving energy as well as countering the earth’s climate change.

Researchers at Purdue University stated that the plan was to form a paint that would reflect sunlight away from a building, compelling it to be extremely reflective although making it very white at the same time.

This world’s whitest paint reflects 98.1% of solar radiation while also discharging infrared heat because of this a surface covered with this paint is cooled beneath the encompassing temperature without using power.

Professor Ruan had revealed that using this paint to coat the part of a roof of around 1,000 square feet could generate a cooling power output of 10 kilowatts which is more powerful than the air conditioners used by most houses.

An ordinary white paint becomes heated rather than chilled and the best heat repelling paint presently available on the market developed to resist heat reflect only 80 to 90 percent of the sunlight and can not drive surfaces colder than their surroundings.

Scientists at Purdue had revealed the two factors that make the paint very white, these are a very high concentration of a chemical called barium sulfate which is also used in photo paper and cosmetics as well as various particle sizes of the same chemical.

Moreover, a news release had revealed that researchers at Purdue University have associated with a company to place this unusually white paint on the market.