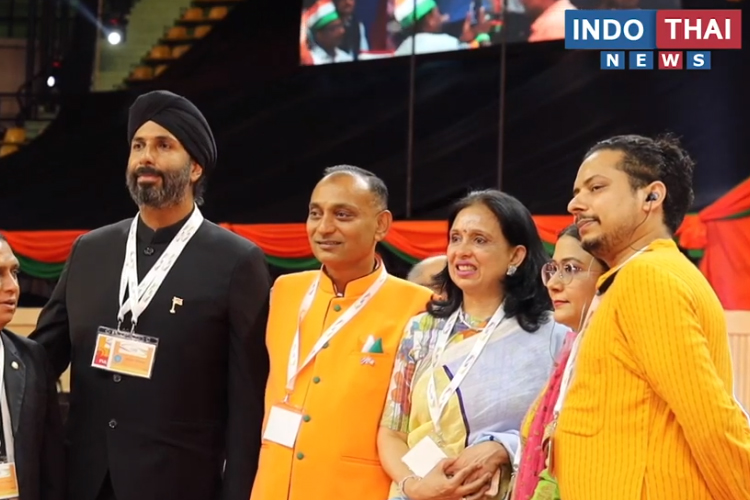 The event ‘Sawasdee PM Modi’ has been organized in the honor of Prime Minister Shri Narendra Modi ji, by Thai Indians alongside the Indian consulate in Bangkok. “Sawasdee”, got from Sanskrit svasti or prosperity, is the word Thai individuals use for welcome and farewell.

PM Narendra Modi was invited at Marriott Marquis Hotel Bangkok, by the Indian Community on 2nd November 2019, in coordination of the Indian Embassy, Thailand. During the 3-day visit to Thailand, Modi ji, associated with the Indian diaspora during ‘Sawasdee PM Modi’ program. Likewise, he has also taken keen interest in the Association of Southeast Asian Nations (ASEAN), East Asia, and Regional Comprehensive Economic Partnership (RCEP) summits during the visit.

The Indian Cultural Groups in Thailand welcomed PM Modi by showcasing various cultural performances.  PM Modi, addressed the gathering by saying that the “ties between India & Thailand Go beyond Governments”. It is the first time PM Modi has visited Thailand. He addressed the gathering by mentioning about 130 crore Indians who are devoted to advance of new India and the increase in number of voters casting votes during Lok Sabha Elections. He further added about the participation of more Women Workforce MPs in Lok Sabha – the biggest number since autonomy. Talking about the India, Myanmar, Thailand roadway, trilateral thruway, he mentioned that its availability will be consistent. Likewise, he mentioned that the aim of the Indian Government is to make India a 5 trillion economy, wherein the investment of Indians from Bangkok will be significant. For the promotion of Higher education, PM Modi declared that the Youth from ASEAN country can take post-doctoral partnership in IITs., etc. For these things to make possible, PM Modi added that the Government Officials of India are 24×7 available for the support.

In an unmistakable reference to the annulment of Article 370 from Jammu and Kashmir and revamping of the state, PM Modi stated, that the current government has been working on issues which seemed impossible earlier.

The entire event was in the line of “Howdy Modi”, bringing Indian Diaspora together.