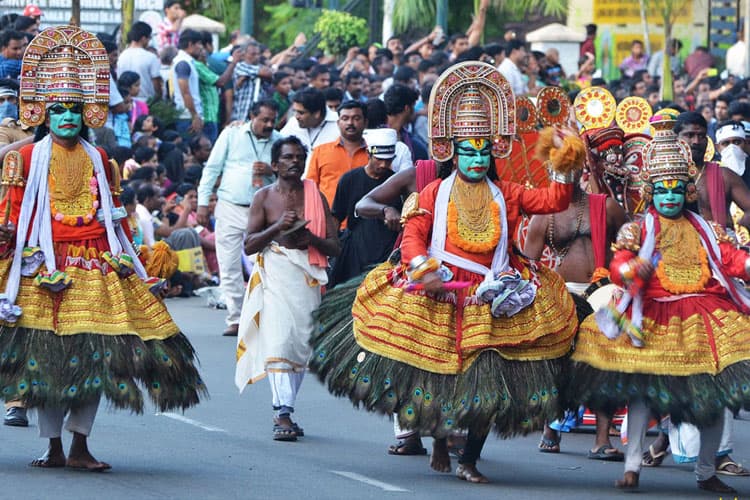 ‘Morals transformed into Tales is what we celebrate as FESTIVALS’

As soon as the monsoon bids farewell to the South of India, the place is loaded up with power, delight, and joy, welcoming Onam, a momentous festival, celebrated significantly in Kerala. From elephant marches to Pulikali performance, from boat race to scrumptious food & floral decoration, this celebration paints the state in a greater number of hues than you can envision.

The Cultural Legacy of Kerala come in the best structure during the ten-day Celebration of the ancient festival, Onam. Observed in the Malayalam month of Chingam, it is said that the Asura King, Mahabali (Grandson of Prahlad) pays yearly visit from Pathalam, during this time. It is believed that Mahabali is so devoted to his kingdom that he comes each year to witness his kin living gleefully. It is out of appreciation for Mahabali that Onam is celebrated.

The story revolves around Mahabali the Mythical King, who ruled the Kingdom of Kerala with Morality, Peace and Prosperity. He sincerely addressed the prayers of his kingdom, making him immensely popular. His growing popularity gradually became a threat to all Gods and to eradicate his influence, Lord Vishnu disguised himself as Vamana (poor brahman). He tricked him by asking three feet land which covered both sky and earth in two steps. For the third step despite Mahabali’s Guru Shukracharya warning against the trick of God, he offered his head which pushed him to Patalam (Hell). However, for his good deeds, he was granted a boon to pay visit to his kinsmen every year, to see them happy and flourished.

If he had listened to his Guru, Onam would have a different story to narrate. Though there are many versions of the story but the it conveys a strong message behind.  Fame must not affect the sanity of a person and Guru’s advice should always be valued.

The Celebration
The celebration of Onam is a ten-day carnival with many rituals and tradition.

The Opening day of Onam is marked with performances by musicians, dancers, carnival floats and ornamental elephants on streets.


People dress in their traditional attire and design flower carpet on their courtyard to welcome the King Mahabali.

Pulikali
Hundreds of people paint themselves to perform the 200 years ago traditional Tiger dance for this occasion.

Another very fascinating event that takes place is the snake boat race on the River Pampa.

No festival is complete without any traditional delicacies. During Onam, home cooked food is served on banana leaves. A nine-course meal with thirteen different food items, Onasadya or the ‘Onam Feast’ makes the vigor of the feast alive.