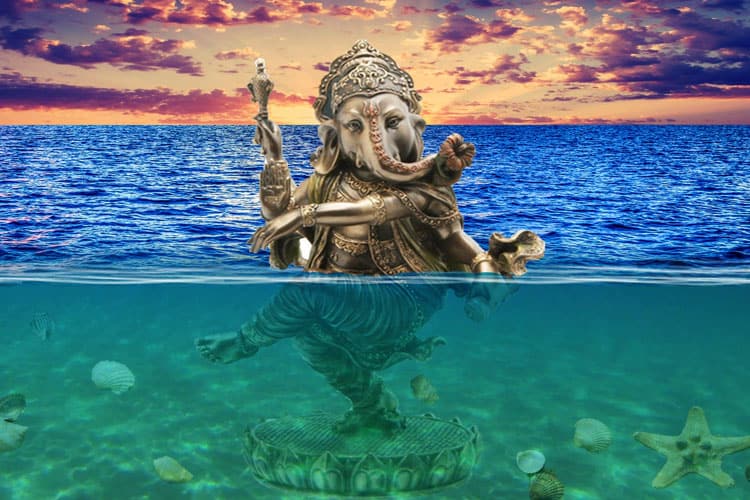 (The God with a curved trunk, a giant body, and gleam of millions of suns, I pray to that Lord, to remove all obstacles from the actions I wish to perform)

Indian Culture is renowned for its elongated celebrations and festivities. Amongst the many spiritual and religious occasions that mark the calendar of Indians, Ganesha Chaturthi is one. The festival is celebrated in the birth of the Elephant-headed God, Ganesh. Celebrated in all parts of the country, but with much gusto in the states of Maharashtra, Tamil Nadu, Andhra Pradesh and Karnataka.

Bringing Home Ganesha
On the first day, Lord Ganesha’s idol is placed after reciting many mantras (Pranaprathishtha), to invoke his holy presence into the statue. Devotees then offer sweets, flowers, especially modak and chant Ganesha’s aarti. People who bring the idol in their house worship them religiously for all ten day and invite friends & relatives to pay visit and take the blessing and prasada. Temples devoted to Lord Ganesha also perform special events and prayers. People from far and near come to invoke the blessings. Neighborhoods also organize pandals and install large idols of Lord Ganesha to rejoice the festival with everyone.

Importance of Ganesha Chaturthi – The Tale
The festival has its origin during the Maratha reign, of Chatrapati Shivaji beginning the celebration. The belief rests in the story of the birth of Ganesha, son of Goddess Parvati & Lord Shiva, created by Goddess Parvati out of sandalwood paste to guard her while she had gone for bathing. In her absence, Lord Shiva got into a fight with Ganesha(without knowing the fact that Ganesha is his son) as he did not permitted him to enter, as per his mother’s orders. Furious, Lord Shiva cut off Ganesha’s head. When Goddess Parvati came to know, she transformed herself into Goddess Kali and threatened to finish the world. All the other Gods & Goddess got terrified and requested Lord Shiva to find a solution and calm the rage of Goddess Kali. Lord Shiva then ordered his deities to instantly get a child head whose mother could not see in negligence. The first child seen by the deities was that of an elephant and as ordered, they brought his head to Lord Shiva. Lord Shiva then immediately fitted the head on Ganesha’s body, bringing him back to life. Goddess Kali was then calmed and once again overwhelmed. All the Gods & Goddess blessed Ganesha and the day is today celebrated for the same reason.

The Visarjana
On the last day of the celebrations, devotees’ parade throughout the streets carrying the idol, showing their bliss by dancing and singing. The idol is finally immersed in the ocean or any bodies of water known as visarjana. This ritual signifies the life and birth cycle of Ganesha and the prayers to Lord Ganesha to come back next year also.