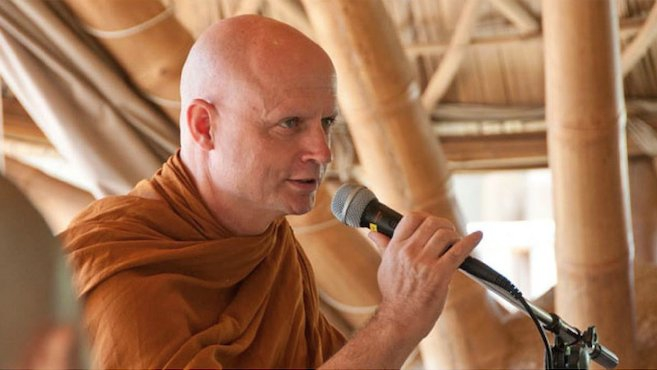 Venerable Ajahn Jayasaro is a well-known (Buddhist) Dhamma teacher in Thailand. Born as Shaun Michael Chiverton on the Isle of Wight, England in 1958 he is one of the few English speaking Dhamma speakers of Thailand.

He joined Ajahn Sumedho’s community as an ‘Anagarika’ for ‘Vassa’ commonly known as “Rains Retreat” in 1978. It is a three month long annual traditional-monastic retreat observed by Theravada practitioners. In the later months of the year he left for Wat Pa pong, Thailand to be ordained as a Novice. The very year he became a disciple of Ajahn Chah, Thailand’s one of the most prominent Buddhist Monks. It was under the tutelage of Ajahn Chah later when he took full ordination as a ‘Bhikkhu’ in 1980.

Ajahn Jayasaro spent his initial five years; after the ordination; in monastic training and later went on a solitary retreat for some time. The next several years saw him alternating between periods of retreats and his teaching and administrative duties. During this time the official biography of his teacher, Ajahn Chah was penned by him. Year 1997 marked him as the Abbot of Wat Pa Nanachat- the international monastery of Ajahn Chah’s lineage. He continued serving the position until the end of 2002.

In early 2003, Ajahn Jayasaro left Wat Pa Nanachat and has been since living at the foot of Khao Yai Mountain National Park in a hermitage. At a nearby retreat centre he regularly offers Dhamma teachings and meditation retreats for both Monastic and lay Buddhists. The Dhamma talks are offered in Thai on the first and third Sundays of a month at the centre and are open to public; otherwise the gates to his hillside hermitage remain closed to visitors. Talks in English are also conducted (on special requests) at the same place but he rarely accepts any invitations that require him to leave Pak Chong. Recently in November 2017 on one such rare occasion Buddhist community of Malaysia had the honor of attending a Dhamma talk at Nalanda Centre by Ajahn Jayasaro.

This inspiring and well-practiced Dhamma teacher is also a key figure in the movement that led to the integration of Buddhist developmental principles into the Education system of Thailand. He takes a special interest in Buddhist education and serves as the spiritual advisor to several schools throughout Thailand. A significant number of books on Buddhism have been written and edited by Ajahn Jayasaro; and several of which have been translated into other languages that include Chinese, French, Italian and Portuguese. ‘Without and Within: Questions & Answers on the Teaching of Theravada Buddhism’ published in 2013 is his latest book that introduces the readers to Theravada Buddhism. The book is written in questions and answers form that doesn’t make it overly academic and even Non-Buddhist readers can easily understand the wisdom of the 2600 years old Buddha’s sermons.

In 2011 Ajahn Jayasaro was awarded an Honorary Doctorate in Buddhist pedagogy by the Mahachulalongkornrajavidyalaya University, Bangkok.

Ajahn Jayasaro’s talks are appreciated greatly for the clarity and uplifting power they possess. People visiting Thailand should not miss the opportunity to visit Pak Chong ,witness and learn from this inspiring Dhamma pedagogue. Those who are not visiting Thailand anytime soon should not get disheartened as his talks are regularly broadcasted on Television and Radio as well are available on YouTube channels.