There is a wealth of Thai history in Old Sukhothai City. There are three physically connected ancient towns that compose the historic town of Sukhothai and the surrounding historic settlements. It is situated in the northernmost part of modern-day Thailand. The three towns are Sukhothai, Si Satchanalai, and Kamphaeng Phet. 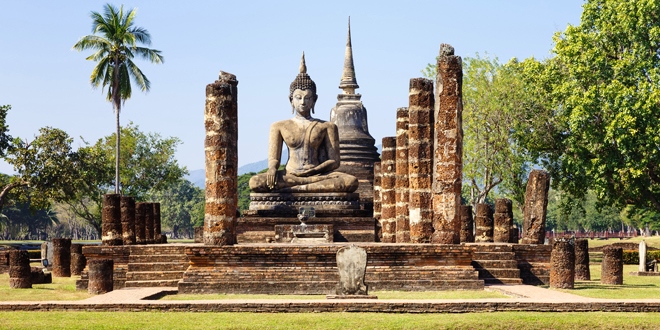 Between the 13th and 15th centuries, Sukhothai served as the first Kingdom of Siam’s political and administrative centre. Si Satchanalai, home to many temples and Buddhist monasteries, was known as the spiritual hub of the kingdom. The crucial ceramic export sector was also centered at Si Satchanalai. Kamphaeng Phet was situated at the southern border of the kingdom and served vital military purposes in guarding against outside invaders and securing the trading network of the kingdom.

Ancient three historical town settlements were clearly united as a single political entity because they all spoke the same language, shared the same alphabet, and had the same administrative and legal system. The towns had a common construction to control water resources. It was linked to a highway named Thanon Phra Ruang. The highway was named after the King who built it!

There are many monuments and sculptures in Sukhothai City that demonstrate early Thai architecture and art in the “Sukhothai style.” The artwork, wall paintings, and architectural features found within the compound of abandoned temples and monasteries speak volumes about the significance of the three cities. Art historians have studied the art and architecture of Sukhothai. They have identified and cataloged the distinctive style that sets it apart from Khmer and other earlier regional styles. They also believe that the Buddhist landmarks and the artifacts in the three towns are timeless classics of artistic creation, giving the art style the name “Sukhothai style.” The oldest traces of Thai writing have been seen in stone inscriptions discovered at the sites. These also provide a complete picture of the Sukhothai civilization’s economics, religion, social structure, and government.

This place is like a treasure trove for history buffs! UNESCO has declared it a world heritage site. So take your lenses and explore the city; you might discover something too!