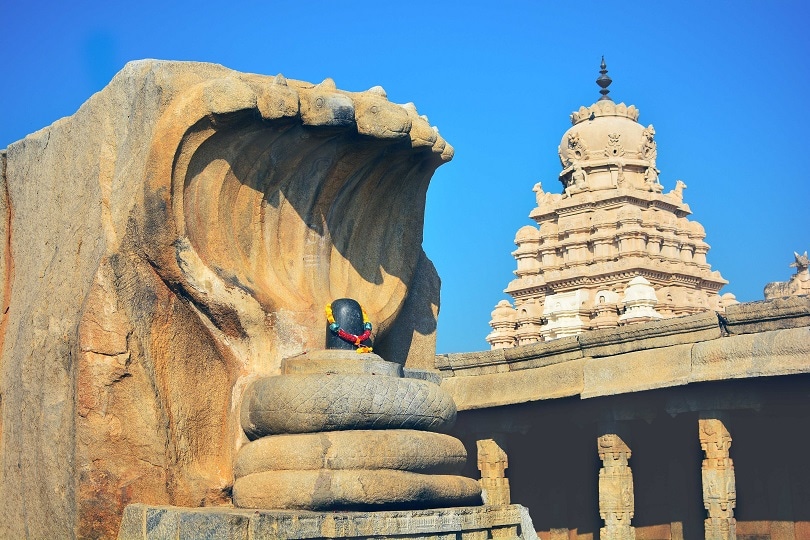 You might have seen pictures or videos of people passing a piece of sheet or cloth under a temple pillar in India! Even if you haven’t, let me tell you! There is a temple named Veerbhadra Temple in India. It is said to have a massive dance hall with 70 pillars. But the fascinating point is only 69 pillars of those 70 pillars support the ceiling. What about that one pillar, you might ask! Well, that one pillar is the famous mysterious pillar that hangs in the air. Yes, you read that right.

It is utterly mind-blowing even to consider what tools would have been employed to create such a minute space between the base of the pillar and the surface of the hard stone floor underneath it. The tour guides will demonstrate several techniques to show that the incredibly sturdy stone pillar is suspended and not touching the ground.

This gigantic granite pillar is 20 feet tall, has a long history, and is particularly stunning because it defies gravity and appears suspended in midair.

A British engineer attempted to lift the pillar in 1924 to uncover the “secret.” He immediately cancelled his procedure because he worried the entire edifice would collapse. Ten more pillars started to move as they tried to do it.

The Archaeological Survey of India (ASI) then carried out in-depth examinations. It established that the pillar was not created accidentally but on purpose to demonstrate the skill of the builders of the time.

The temple is full of fascinating mysteries and beliefs, keep scrolling and stay amazed.

You can find a massive Nandi statue (the bull from Hindu mythology) carved from a single piece of stone 200 meters from the temple. The giant monolithic bull is 15 feet in height and 27 feet in length. Perfect lines and elaborated designs are carved on the bull. It seems impossible that they could have been produced by hand. Architects continue to be perplexed. Why was it created?

On the grounds of the temple, there is a “Kalayanamandapam,” or unfinished marriage hall. The intention behind building the hall was to commemorate Shiva and Parvati’s union. However, why was it purposefully left undone? Thera are two large red spots on the western side of the hall.

The story claims that the son of the builder, Virupanna was blind. He began constructing the temple, and soon after, his son’s blindness was cured. The other courtiers, however, grew envious and protested to the King that he was spending royal funds on his son’s treatment.

The monarch, furious, gave his troops the command to blind Virupanna. Virupanna administered his punishment. The red spots on the incomplete marriage hall’s walls depict his eyes. Nobody finished the construction of the hall after that incident.

Visit the temple, and witness the mind-blowing mysteries yourself!

Witness the Sukhothai Old City if you are a History Buff!