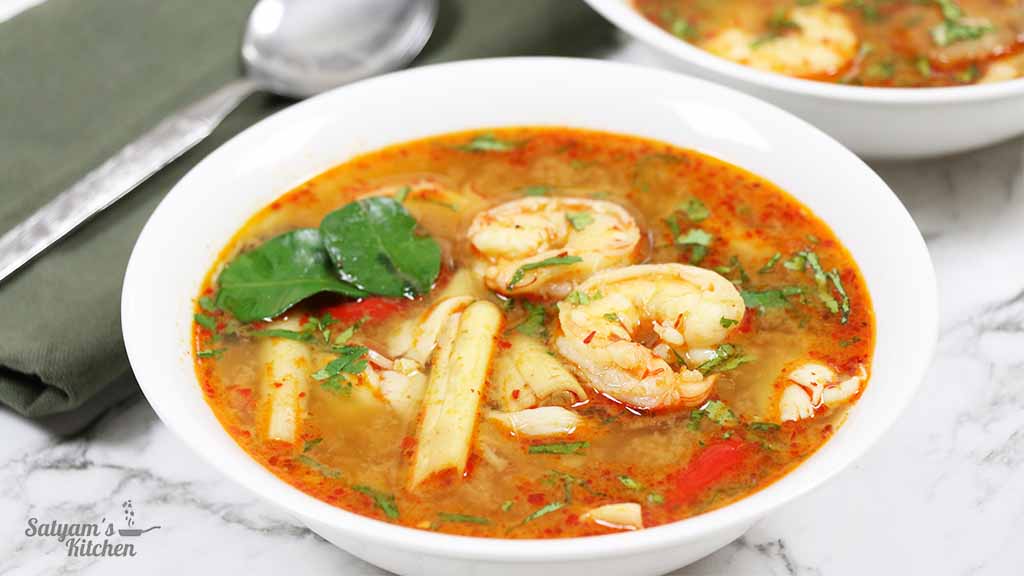 Thai restaurants usually serve Tom Yum Goong, or Tom Yum soup, which is a signature Thai soup. This soup is described as “hot,” “spicy,” and “sour.”

In Thailand, Tom Yum Goong is available in countless variations. Spices and herbs vary from mild to spicy, sour to sweet, as do the broth choices like clear or creamy. These broth choices generally use shrimp or coconut milk based on the type of spice and herb mix.

This soup tastes more delicious when nam phrik pao or Thai roasted chili jam is added to it. A wide range of ingredients is used to make jam, including dried shrimp, onion, garlic, tamarind, dried chilies, salt, and sugar. It adds a flavorful kick to the soup by taking it to a whole new level.

Its excellent flavor is enhanced by the aromatic spices, including lemongrass, kaffir lime leaf, galangal, lime, and the small spice bomb the Thai bird’s eye chili. This soup is delicious whether it is vegetarian or non-vegetarian, and the main meat chosen in this soup is shrimp. Some versions of the recipe allow shrimp to be substituted for beef, chicken, or even pork.

The soup is simple and quick to make as you prepare the base broth and aromatic spice paste in advance. For preparing the soup you need to gently simmer the shrimp shell and head with aromats like galangal, kaffir lime leaves, lemongrass, cilantro stems, and tamarind for around 20-25 minutes. After that strain the stock and discard all the spices and shrimp shell and head.

In the same pot, start boiling the broth with some lemongrass, kaffir lime leaves, galangal, and oyster mushroom. Cook till the mushrooms are soft, add the deveined prawn or goong, Thai bird’s eye chili (as per your liking – remember it is quite spicy but a must), onion, nam phrik pao, and tomatoes. Simmer for a few minutes until the shrimp plump up and the flesh turns opaque.

Once the shrimps are done, add fish sauce and lime juice to provide that necessary sourness to cut through the spiciness of the soup. Turn off the flame, add fresh cilantro leaves and serve it piping hot with a bowl of rice.

It is important to always prepare the soup with fresh ingredients as cooking with paste from a store will not give the soup that freshness and zing. Try it yourself and you will understand the difference.