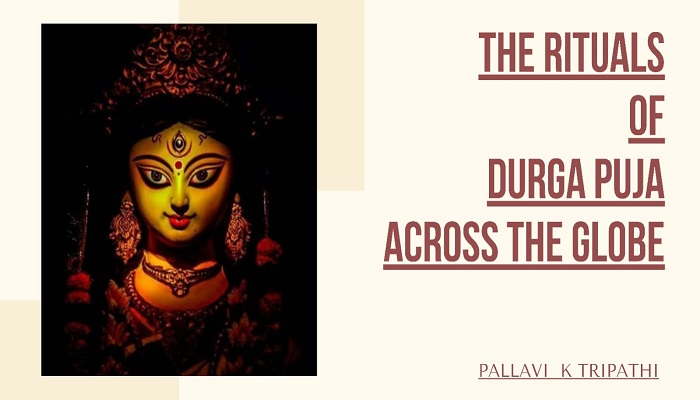 Maa Durga who represents all the core aspect of Matrushakti (faminism) that is love, care, creation, strength as well as destroyer of evil, worshipped by her devotees not only in India but also world-wide having strong impacte in all Hindu denominations like Shakt, Shaivism and Vaishnavism. In the month of Chaitra and Ashwin as per Hindu calendar, Durga puja takes place. These nine days are not only of devotion, prayers, festivity but most importantly to celebrate our proud culture.

Over the period of time , Durga puja has became an integral part of Hindu culture showing their devotion towards Shakti. Around 16th century Influential and Royal families started organising Durga puja on a grand scale from domestic puja to temples to big Pandals.

Celebration in India :-
Navratri stands for nine nights is a festival of 10 days. Durga puja is celebrated in entire India. As different regions have some difference in basic Puja-vidhi but the emotions and devotion is same all over.

Durga puja Started with;
Vrat that is Fasting of not only restricted eating habits but many other control and regulations over ones mond and body.

Aagman of maa (coming of maa Durga) kalash Sthapna ( installing a urn called Ghat.)
Akhand Jyoti (A lamp which stay ignited for nine days continuously till Yagya.) Shakti-Stavan path (recitation of Durga- saptashati which states the origin of Maa Durga to her battle with demons and victory over evil.) Kanya pujan (worshipping small girls considering them Devi )
Yagya :-A ritual in which devotees put some particular offerings in fire followed by some mantra, shlok and prayers for the well-being of the universe.

Visarjan :- Sending back Maa Durga with all the sadness, negativity, our problems and praying her to come back again with all the prosperity and good luck. Bhajan, kirtan, Jagrata follwed by Garba- Dandiya dance add lots of energy, positivity and festivity in celebration.

Celebrations outside India:-
Durga puja is not celebrated only in neighbourhood countries of India but a common, famous practice at each place where Indians exist. Started from Nepal this puja is known as Dashin.In Bangladesh not only Hindu community but local citizens also involve in celebrating Durga puja.

Either its south east Asia or European countries or African countries different communities like Gujaratis, Punjabis or Bengalis celebrate Durga puja in their temples, pandals or in huge banquet halls by placing the idol of Maa Durga followed by all the vedic customs and rituals.
As they say “the whole form that a human creats is culture” and Durga puja is an occasion to celebrate our glorious culture, heritage and traditions.So keep enjoying, stay rooted.