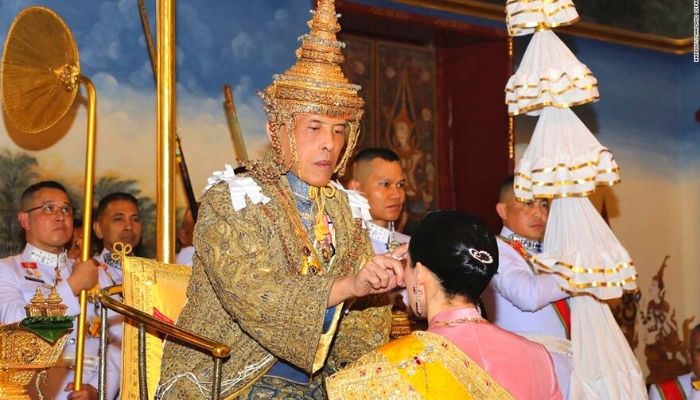 Thailand has a vast understanding of Buddhism and the practice of Buddhist customs. However, there are still quite a number of their traditions based on Brahmin ways of doing things. (Brahmin is a category in Hinduism with people who have specialized as teachers, priests. Physicians as well as strong protectors across generations of sacred learning.) Some areas where the Indian culture influence showcases itself in Thailand during the king’s coronation include:

The concept of the king’s coronation in Thailand

The king’s coronation is a ceremony that is worth the name in Thailand. It abounds in the best kind of exquisite art which has been passed on through the years for more than a century now. The Chakri Dynasty was established in 1782 by Thai King Rama and it has seen a total of 11 coronations with the 12th King of Thailand as King Rama X’s. During these coronation ceremonies of the Thai king, several Buddhist customs are incorporated but their main influence is the Hindu Brahmin beliefs together with the Indian civilization.

The performer of the King coronation, which is the most important ceremony in Thailand, is the Chief Brahmin which is because of the Rajasuya (which refers to the ceremony where a king is consecrated) of India.

The two significant ceremonial elements in Indian customs & culture are water and fire. Water is highly believed to have power that purifies and for that reason, it is used in the purification of the king. This is done before the King coronation ceremony in a ceremony called ablution. It is believed that the ablution transforms the king to Brahmin and after which he then changes into his regal vestment that is fully decorated as he waits for the next rites.

Water also plays another important role after the purification bath. When the king moves to the octagonal throne, prominent figures who are in eight different directions present him with anointed water and this acts as a sign that he is the fully accepted king by people despite where they may be from. It acts as a symbol of not only governance but also commitment. The water that is used in Thailand for this contains leaves which are believed to be holy, milk as well as fruits.

Music has been considered a ceremonial fulfillment for centuries now. For example, to glorify gods religious texts that were large in volume and were from ancient India were churned. During kings’ coronation in Thailand, the musical bands that are used have remained the same. Some musical instruments are used in the royal ceremonies which are aimed at creating a heavenly sound for the king. An example is the couch shell.

As much as the times are changing, it is quite admirable how Thailand has managed to still have the Indian culture deeply rooted in quite a number of their practices and intend to keep it that way

The Indian culture & civilization has influenced the use of colors, construction of temporary structures as well as the use of materials in Thailand’s king coronation ceremony as the king is perceived to be divine. Although with changing times the elements of the architecture used for coronation have changed progressively, there is still a significant gist in the ceremony which has been continuously passed on through the generations. That is the architectural design which is from the belief of Devarajan that is Indian and encompasses the belief of a divine king.

Coronations make use of thrones that have intricate details as well as mystical creatures sculpted on them. This is Hindu beliefs symbolize a place that is regarded as the center of the universe.

As we get dig deeper into it, we find that Thai culture is heavily influenced by Indian culture and not just restricted to Thailand’s king coronation ceremony.