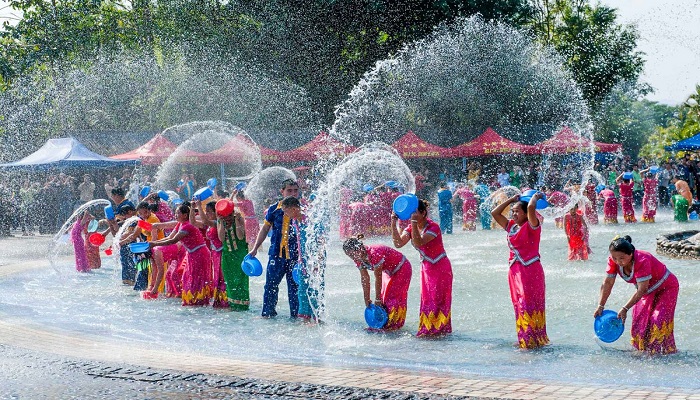 If you are in Thailand between April 13th and 15th this year, and happen to get wet by someone pouring water all over you, don’t get offended; as this is the way Thai celebrate their Buddhist New Year.
Held every year on 13th April, which has now been extended up to April 15th for each year, Buddhist New Year celebration is the biggest festival celebration taking place in Thailand, known as Songkran.

WHAT IS SONGKRAN?
Songkran is Thai New year’s national holiday. It is celebrated each year on 13th April, and the festivities runs up to 15th April, a trend that started two years back.
Meaning ‘transformation of change’ alike the arrival of spring, aligning with the Buddhist calendar. Songkran was the official New Year in Thailand up until 1888, but afterwards it shifted to April 1st, and then to January 1st aligning with the World’s calendar.

The original New Year was then transformed into the Buddhist New Year national Holiday. Songkran word comes from a Sanskrit word that means ‘passing’ or ‘approaching’.

Interesting Things to Know About Songkran

Celebrations Beyond Thailand
This festival is not just celebrated in Thailand, but some neighbouring countries as well including Cambodia, Laos and Myanmar.

Fun and Festivities Galore
This festival is not just about sprinkling water as a way of purification but for Thais and the tourists that visit each year, it is a day to celebrate, have fun with water and chill down in the hot season of April.

Rituals Across the Country
There are numerous festivities and activities associated with Songkran, the primary being cleansing with water that signifies purification of one’s sins. Another common practice is paying tribe to the dead and offering food and robes to the monks.

Regionally, North Thailand sees rituals where firecrackers are burst to ward off evils, whereas South Thailand pledges and work towards not hurting animals. And the central part engages in activities of setting free buffaloes, cows and birds.

Pageants and Parades
Dousing each other with water, arranging live musical festivals, folk dances, beauty pageants and traditional parades are all part of Songkran festival happening around the country.

Tourists Flock from Across the Globe
Not just with locals, but Songkran has become hugely popular with tourists from across the world, as much as this time of the year is being busiest for the travel and hotel industry in the country.

Elephants are an Important Part of The Festival
Yes, if you think that Songkran festival is for humans only. As much as Thai people value animals in their community and rituals, they ensure to make them an integral part of their celebrations, especially the much valued and admired elephants, across the country.

You can easily see elephants gelling well with people, engaging in water fight in a fun way. They get decorated with different colours and take fun spraying water over people.

How to Prepare for the Songkran Festival
As I experienced it last year, there are certain things people, especially tourists, need to keep in mind so that they are able to enjoy without any blemishes, as you would be experiencing such a grand affair for the first time in your life:

Be Ready to Get Wet
No matter where you are in the country during this festival, there is no code of avoidance. You step out, you will get wet. So, rather than running away, let the festivities and water you soak you up.

Keep Your Essentials Safe
When out, your phone, wallet, money, documents and other elements are important for you, which needs to be protected from the sprayed water. Invest in a waterproof bag, an appropriate size, that keeps your valuables safe and is easy to carry around.

Wear Proper Clothes
Investing in super dry clothes is a good idea. Overall, you must be wearing light clothes specific to the situation, including a beach short underneath, tees, and flip-flops. There is no dearth of such types of clothes in the local market there.

Goggles
Being blasted directly in the eye with a water gun can be a worse situation. So keep your eyes safe, and your mind and face ready to be hit with a pair of goggles. you can find numerous varieties, adding to the style you want to carry all day long.

Become Involved, Fight with Water Guns and Don’t Take Anything Personally
The streets are packed all day long, especially around the Khao San road in Bangkok, and some popular hotspots including Chiang Mai, Phuket and more.

So, be ready, be patient, get a good, big, sturdy water gun yourself, and take to the streets to get ready for a water fight with Thai people (they are cooperative, friendly and love the tourists becoming a part of their celebrations).

And it is not that you have to pay for water, like you pay for drinking water. The locals usually put up huge containers of water on the side of the street for you to fill and refill your gun easily.