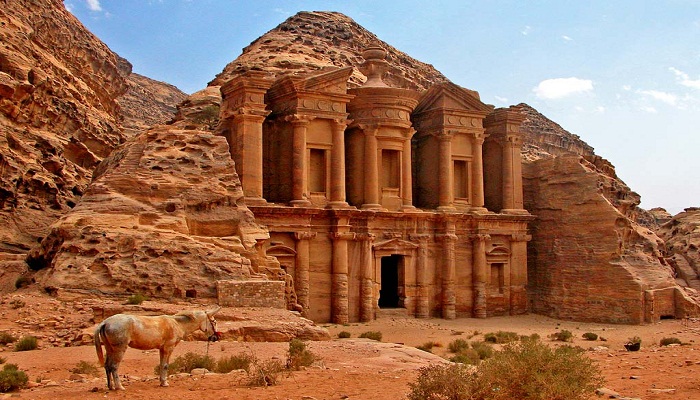 You must have heard the name Petra, as it is known as one of the seven wonders of the world. Actually, it is a historical city located in Jordan, which is famous all over the world for its buildings carved out of stone. It is also known as ‘Rose City’ because of the red colored stones here. The Nabataean Empire is believed to have established Petra as its capital in the 6th century BCE, while construction began around 1200 BCE. In today’s time, it has become a famous tourist place, where people from far and wide come to visit. Come and be surprised to see the beauty of this historical place. Petra, built on the slopes of a mountain called ‘Hor’, has been given UNESCO World Heritage status, while the BBC has included it in its list of ’40 places to see before death’.

The first real archaeological excavation of this historical site was done in the year 1929. In the year 1989, the film Indiana Jones and the Last Crusade was filmed at this place, after which the place became famous worldwide and became Jordan’s biggest tourist destination.

Petra is a vast city of tombs, monuments and sacred structures. There are about 800 carved tombs here. There is also an archaeological park spread over 265 square meters around Petra. Apart from this, there is also the Petra Theater, where there was a seating capacity of five to eight thousand people.

Carriage of vehicles is prohibited in the city of Petra, but donkeys, horse carts and camels can be brought here. Actually, the reason for this is that to go inside Petra, one has to pass through a narrow valley of about one kilometer. The best time to visit here is considered to be the months of March to May or September to November.