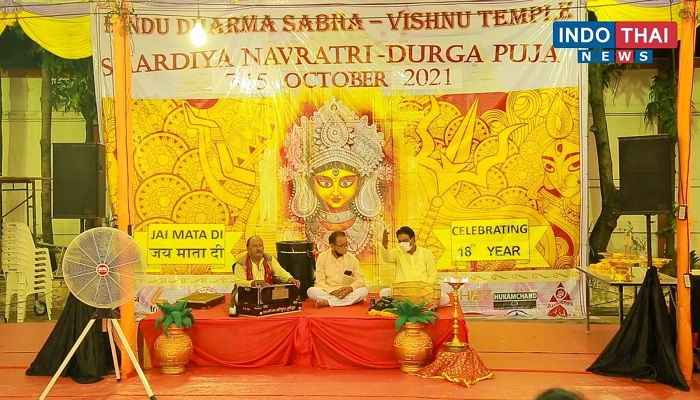 In Thailand hindu dharma sabha hosted the Shardiya Navratri durga puja. Thai and Indian communities joined the auspicious occasion. the purpose of this grand annual Navratri festival is to promote histrorical, cultural and Relatations between India and Thailand

Navratri stands for nine nights is a festival of 10 days.Durga puja has became an integral part of Hindu culture showing their devotion towards Shakti. Durga puja is an occasion to celebrate glorious culture, heritage and traditions.

Celebrations include worshipping nine goddesses in nine days, stage decorations, recital of the legend, enacting of the story, and chanting of the scriptures of Hinduism. The nine days are also a major crop season cultural event, such as competitive design and staging of pandals, a family visit to these pandals, and the public celebration of classical and folk dances of Hindu culture.

Hindu devotees often celebrate Navaratri by fasting. On the final day, called Vijayadashami, the statues are either immersed in a water body such as a river or ocean, or the statue symbolizing the evil is burnt with fireworks, marking the destruction of evil.