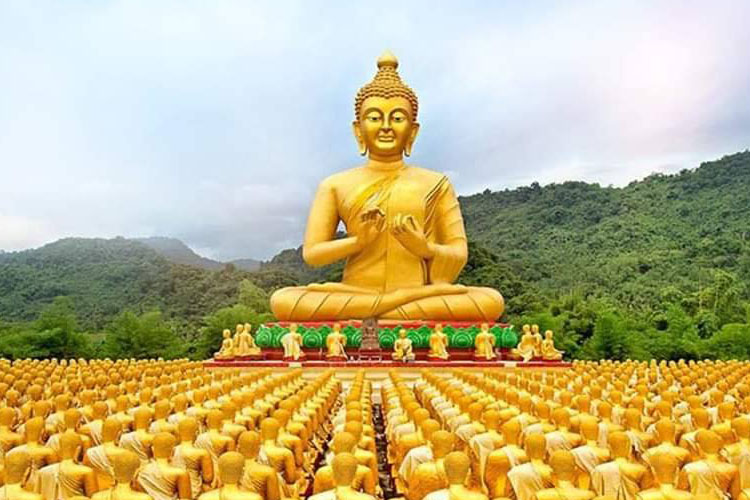 It was built by “Phra Racha Piphat-Kosol”, who is an abbot of Wat Sri Sudaram in Bangkok Noi, Bangkok Thailand. On the occasion of the 2600th year of “Enlightenment” of Lord Buddha in year 2012 for dedicate to Buddhism and in Thailand has never been any place, built a memorial the of Makha Bucha Day before.

Start construction in January 2012 and on 7 March 2012 was the Makha Bucha Day has a ceremony for casting the head of the Lord Buddha Statue, showing obedience, teach “Ovadha Patimokha” which a width of 9 meters, 13.5 meters high.

Makha Bucha Buddhist Memorial Park Built on the occasion of Great period, Garden Buddha 2600 years which the monks, Buddhist devotees who come together without an appointment at the Weluwan Vihara is near the Rajgir, in the third Thai lunar month. To represent milestones on time Buddhist era “Wan (day) Chaturong-Khasanibat” in Thai or Buddhist Devotees day of conference is comprising the great four events, namely :
1. 1250 monks, Buddhist devotees who come together without an appointment.
2. These the monks, Buddha disciples have been ordination from the Lord Buddha by himself.
3. All the monks were the Buddhist saint who enlightened.
4. That day was a full moon day of the third lunar month (Makha)
It is to showing obedience, teach “Ovadha Patimokha” As announced important principles Buddhist as guidelines for the Dissemination of Buddhism.