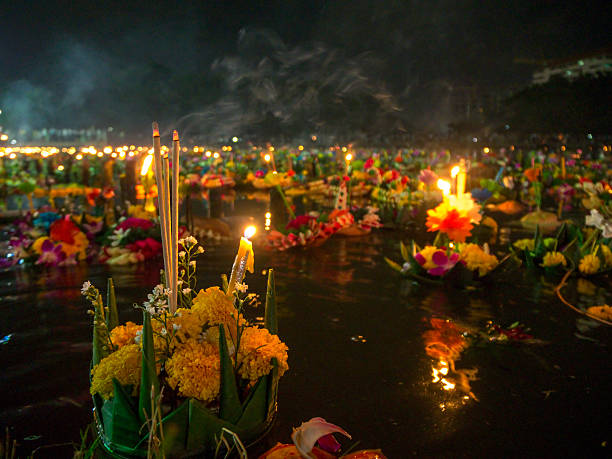 Loy Krathong Festival is an annual traditional Siamese festival celebrated by Thais to pay respect to the Goddess of Water and the Buddha.

It is not a public holiday but is celebrated nationwide when people gather around lakes, rivers, and canals to release floating lanterns or Krathongs on waterways.

When is Loy Krathong Festival celebrated?

Loy Krathong Festival is celebrated on the evening of the 12th full moon of the Thai lunar calendar. It usually falls in the month of November, according to the Western calendar.  Therefore, the Loy Kratong date is not fixed. It changes every year depending on the full moon.

What is the meaning of Loy Krathong?

The word loy in Thai means ‘to float’ and krathong translates to ‘basket or boat’, so the meaning of Loy Krathong is ‘float a basket’.

A krathong is a small lotus-shaped boat traditionally made from banana leaves and decorated with flowers. In the center of the Krathong, there are traditionally 3 sticks of incense and a lit candle, and other things like hair and coins.

As its name implies, on the evening of the festival, Thai people gather around rivers, lakes, and canals to release lotus-shaped baskets.

Why is Loy Krathong celebrated?

Loy Krathong, which originated in the ancient Sukhothai Kingdom around 800 years ago, is celebrated to pay respect to and thank the Goddess of Water (called Pra Mae Khongkha) for a year’s worth of her abundant supply, ask for an apology for polluting the waters, and pay respect to the Buddha.

Nowadays, it is also a way to get rid of negativity gathered during the previous year and welcome good fortune in the coming year.

Traditionally Thai people will begin the festival by making their Krathongs at home with friends and family, although many do also buy them from local shops.

At nightfall, everyone heads to waterways or temples where religious rituals will take place and the Krathongs are released.