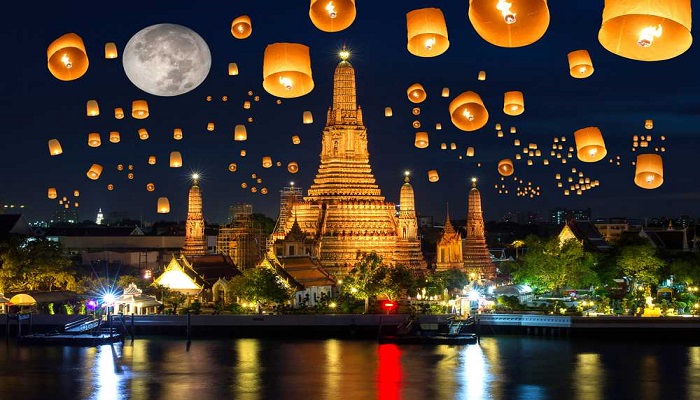 Some of the curate experiences in which everyone wants to live and make the lives enjoyable
and animated. One such experience is the festival. Festival is celebrated to give a positive influence in each and everyone and keep them away from temporal distractions. Festival is all
about lights, music, food, etc. so everyone joins the festivals with their friends and family. One
such beautiful and grand festival celebrated in Thailand is “Loy Krathong”.

Loy Krathong is a Siamese festival celebrated each year with a lot of enjoyment and entertainment in the kingdom of Thailand.

Thailand people conduct a festival every other week. They find some sort of reason to dance.
It is one of the biggest festivals celebrated in Thailand. It is also celebrated in places that have
significant southern Tai cultures. This festival Loy Krathong refers to float a basket

The whole idea of the festival is that it is a new beginning. When people lit the candle, they send a prayer, memory, or wish for a new start to their lives and forget the bad that happened in the past. So the Thai people and the foreigners believe that they leave their misfortunes downstream and go away for good. Loi means “to float”. Before sending the basket into the river, they burn the incense and light the candles and that is kept on the top of the basket of Krathongs.

Due to some circumstances, if you couldn’t able to make a basket you can purchase the baskets in all the major waterways in Thailand. The prices vary depending upon how much work and beautiful flowers it consists of. Then we can see many women wearing Thailand’s traditional queen attire and moving under the heat. You can see many people mainly girls and women fainting due to the unbearable heat. Make sure that, you remain hydrated while participating in the celebrations.

What is Loy Krathong?
Loi Krathong is celebrated by the Thai people during the full moon day of the 12th month in the Thai lunar calendar. The date is not constant every year. This grand festival starts as soon as the rainy season is over. Sometimes it starts in the month of November.

The climate will be dry and cool at the end of the month. So it is the best time to visit the Land of Smiles It is considered to be the festival of light. As it means to float a basket, the Thai people readily make a traditional basket made of banana leaf to float on that event. It is believed that the festival was first begun in the Sukhothai kingdom, situated 5 hours north of
Bangkok.

Well, yes, it is, and this is among the most beautiful things about Thai people that make Thai culture unique

What Thai people do during the festival?
The Loy Krathong is mainly celebrated to thank the goddess of water. The goddess of water is Mae Khongkha, they pray by sending the decorated baskets down the river. Most of the people pray and say thanks to the goddess for giving water while others pray for forgiveness for using plenty of water or contaminating it.

To decorate the basket, Thai people use local flowers, candles, and incense. The people go
with their families and assemble near the river, lit the candles, and float the basket into the river.

The festival is not considered a religious holiday in Thailand, but people come to experience immense entertainment and joy. The basket in the boat travels throughout the kingdom of Thailand. Even, some of them add money to the basket.

Flying Fire Lanterns
The Thai people and the foreigners make lanterns and place a candle at the center of the lantern during the festival. They wait till the burning candle creates hot air. Once it is generated, they leave the lanterns into the sky. It’s a beautiful photographic moment and a scene that no one forgets.

Interesting and unknown facts about the festival
• Some people drop money or coins into the basket or krathongs.
• Some of them choose a turtle or an eel to place on top of the Krathong.
• Some keep a photograph or things that have a symbolic significance in their life over the basket and
send them into the river.
• The basket is entirely made of banana leaf and the boat is as long as 12 meters.
• If the floating basket returns, the Thai people consider it as a bad omen.
• Some people as a strange belief put strands of hair, nails, or scraps of apparels over the basket.
• The active participants of the event are the large scale companies and government agencies. They are
the ones who launch their baskets into the river.

• The active participants of the event are the large scale
companies and government agencies. They are the ones who launch
their baskets into the river.
• During the festival, the pageant competition is been conducted as a
grand event over the years where women dress like a queen in traditional Thailand wear.
• The history of this festival includes stories of the many legends.
Some people believe that the court lady was the first to conduct this
act while most people believe that it is a Brahmanical festival that was
adapted into the Thai culture.
• You can see a lot of fireworks. So you will able to see the sky colorful
during the festival.
• Chiang Mai is the place where people lavishly celebrate Loy Kathrong.

If you want to enjoy and gain the positive vibe of the festival, go anywhere near the water bodies of the country to experience it. As soon as the festival gets started, the whole country will be colorful with the overhung lights present all over the city. Pay respect to the goddess of water, every lake, ponds, rivers, and any form of water body throughout the country. The must-visit places during the Loy Kathrong festival are Sukhothai, Phuket, Bangkok, and Chiang Mai.
As the festival happens after the rainy season, the atmosphere is clear and bright. So you can enjoy the occasion without any distractions. Most of the foreigners come to Thailand during this festival to inhale the positivity and exhale the misfortune that happened in the past.

The 2022 UbonRatchathani Candle Festival is set to amaze visitors