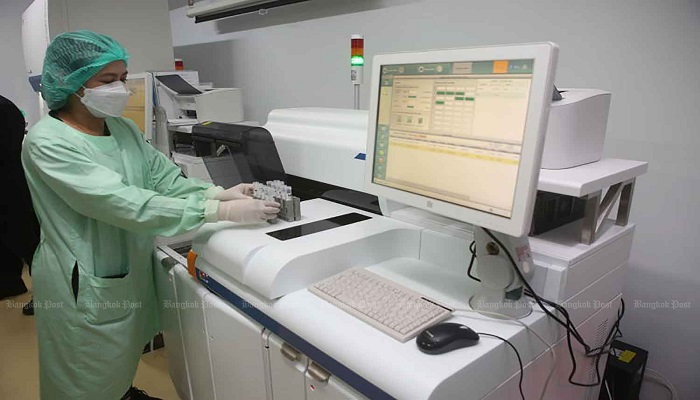 Bangkok’s Ramathibodi Hospital has been equipped with the country’s first-ever antigen test machines which have been tested for their accuracy.

The two Japanese-developed Lumipulse G1200 machines donated to the hospital by CP All are now ready for use after being tested for two months. At least 500 samples were tested to verify the machines’ accuracy and efficiency.

The machines are widely used in airports in Japan for Covid-19 screening due to their 35-minute test result turnaround.

Ekawat Pasomsub, chief of Virology Unit, Department of Pathology, Faculty of Medicine Ramathibodi Hospital, said the machine produced a 98% result for sensitivity and 100% for specificity. Dr Ekawat said these results are much better than an Antigen Test Kit and are very close to the World Health Organisation’s recognised RT-PCR method.

He said that the Lumipulse G1200 is very simple to use and testing is done through analysing saliva through enzyme immunoassay, a technique which leaves little room for human error.
When compared with a RT-PCR result, the machine could give a 100% accurate result for positivity, which means that it has 100% sensitivity for positive cases,” Dr Ekawat said.

For negative cases, it is still more reliable than the ordinary ATK,” he added.

Dr Ekawat also said that the machine is very useful for large-scale testing, which can reduce the workload of medical staff. It is also safer due to it not needing to use a swab.

Meanwhile, Chalee Namchoon, a director with the ALL WELLNESS company under CP ALL, said the machine has been already approved by the Food and Drug Administration (FDA).

Mr Chalee said the company decided to donate the machines to the hospital due to the large number of Covid-19 patients in its care.
He said that the machines are likely to fit well with the government’s plan to open the country next month, especially given that each machine can screen a lot of people within a short period of time.

He said that the machines are likely to fit well with the government’s plan to open the country next month, especially given that each machine can screen a lot of people within a short period of time.