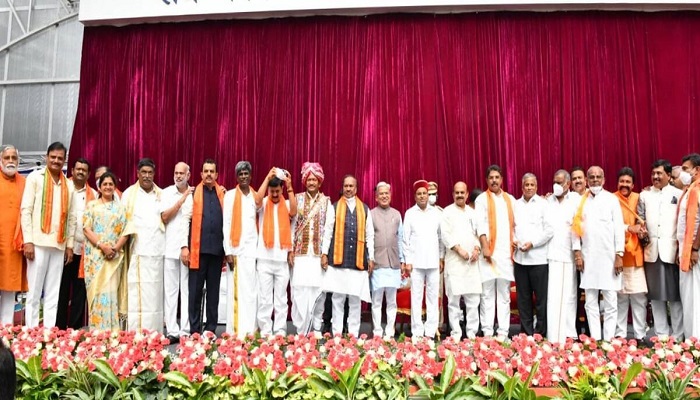 In Karnataka on Wednesday, 29 MLAs were sworn in as ministers by expanding the cabinet in Vasavarao Bommai’s government. No one got the Deputy Chief Minister’s chair in this government, whereas in the previous government of Yeddyurappa, 3 deputy CMs were made.

The name of former Chief Minister BS Yediyurappa’s son and Bharatiya Janata Party’s state vice-president B Y Vijayendra was not included in the list. Governor Thaawarchand Gehlot administered the oath of office and secrecy to the new ministers at Raj Bhavan.

CM Bommai said that before the expansion of the cabinet, talks were held with the party high command in Delhi. The list was decided after discussions held till Tuesday night. After this I sent the list to the Governor and talked to him. Both new and experienced ministers have been included in the cabinet.

Bommai said the names have been selected after much deliberation. The question of any kind of pressure does not arise. On the list of names of ministers, he said that the Rajya Bhavan will release the list after taking oath.

On the question of not including Yeddyurappa’s son Vijayendra’s name in the list, Bommai said that I had spoken to the former Chief Minister about this. After this, Arun Singh, the national general secretary and in-charge of Karnataka, also spoke to Vijayendra, but in the end it was decided not to keep his name in the list.

The Chief Minister said that the cabinet has been formed keeping in mind the elections to be held in 2023. The cabinet expansion is taking place after the consent of Prime Minister Narendra Modi, Home Minister Amit Shah and party’s national president JP Nadda. The new ministers will gain their trust by focusing on the needs of the people.