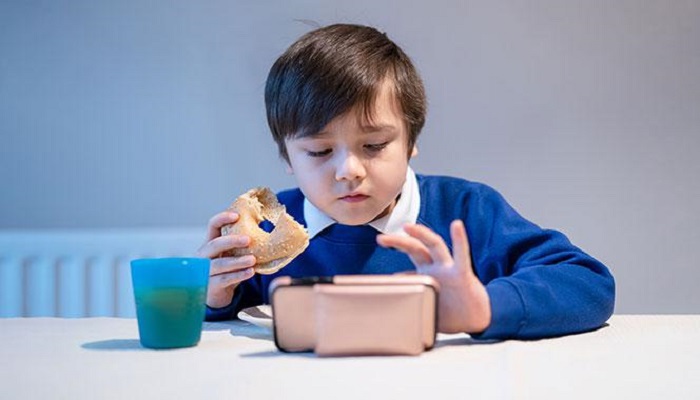 There has been a research on the eating habits of children in the prestigious magazine named Environmental Journal of Health. In this research done in collaboration with many big universities of the world, it was found that children who eat while watching TV, laptop or mobile, they later also have tantrums in terms of food. These children have been seen to be aggressive even on small matters. It was also observed that children up to 10 years of age who eat while watching TV have a manifold increased risk of obesity, while children who eat lunch or dinner while interacting with family have a lower risk of obesity.

10 to 12% of children in India are obese
The survey, published in the BioMed Central journal, has shown an increase in the incidence of obesity in children over the years, and increasing obesity in children is emerging as a serious problem. 10 to 12 percent of children in India are obese. By 2030, nearly half of the country’s children could be affected by this disease. According to a recent survey, the consumption of oil products among Indian children has increased by 20 percent in the last 50 years. Children between the ages of 11 and 20 are reported to account for nearly 80 percent of those eating candy, chocolate, pizza, french fries and sweets.

WHO warning
The World Health Organization (WHO) recently released a report, in which the screen time of children below 5 years of age has been fixed. More than the prescribed amount of screen time of children under 5 years of age has a direct impact on their physical and mental development. In this report, WHO has instructed to keep children away from mobile phones, TV screens, laptops and other electronic devices.

what do psychiatrists say
Psychiatrist Dr Binda Singh says that many parents also come with complaints that children start shouting at the smallest things. Often parents also make their children sit in front of the TV to feed them or give them something by putting something in the phone.

This is a very wrong practice. In such a situation, the attention of children gets divided and they eat more food than hunger. At this age, the imagination of children is sharp. That’s why earlier people used to tell stories to children. But now instead of telling stories, parents hand over the phone to the children.

Include fruits and vegetables in the diet of the child. Children love colours. Make colorful vegetables. Children should eat pulses, green vegetables, which is beneficial for their health. Keep children away from chips, crunchy, junk food, chocolate. These are very harmful for children.

Risks associated with obesity: There can be many complications due to obesity. like-

Symptoms and effects of obesity

How to manage obesity?