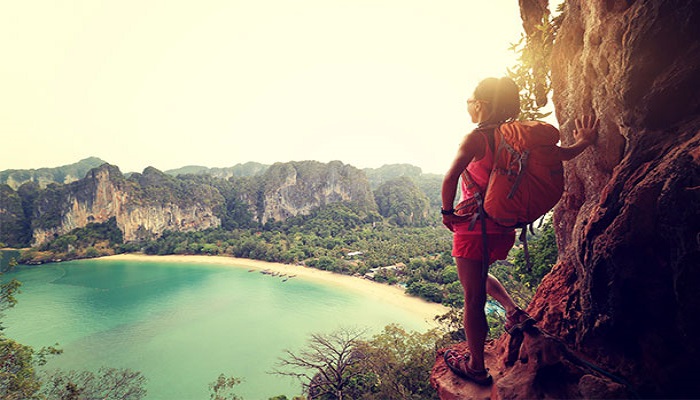 Thailand has always been deep rooted in its culture and traditions. Though tourism has extremely taken a hike here in the last few years and locals are no strangers to frequent tourist inflow, there are still some cultural etiquettes that are non-negotiable. While you need not follow a strict code of conduct while touring in Thailand, there are some practices and abstinences you should keep in mind so as to not offend the locals

Let’s start with the DON’Ts
Don’t Disrespect Their Belief Related to the Buddha
Buddhism is a large part of the Thai culture. Around 95% of the country follows Buddhism. There are numerous different images and statutes of the Buddha all over the country. As a tourist also, everyone is expected to respect the Buddha in all of its forms and images. Do not do the following with anything related to Buddha:

Both the Buddha and the Royal Family have their own form of ‘wai’ or the Thai form of greeting and that should be followed in showing respect towards them. To ‘wai’ to them, one must press their hands together, bow their head and touch their thumbs to
the forehead.

Don’t Point Fingers or Touch Anyone’s Head
Thai people are extremely particular about social conduct and their personal physical space. When in Thailand certain physical acts need to be kept in check. Do not touch or pat anyone’s head, it is considered one of the most important parts of the body and a stranger touching it is considered to be disrespectful. Do not even ruffle a child’s hair. If it happens accidentally, do apologize. Also, never point fingers towards anything or anyone. If you need to, gesture with all four of your fingers and the thumb flat on the palm. Most importantly, do not put up your feet on the table, or point with your feet or touch anyone with your
feet.

Don’t Disobey the Dressing Etiquette in Thai Temples
Thailand has several temples spread all over the country and it is impossible to not visit one when travelling there. There are over 40,000 temples here and a major tourist attraction. But before visiting any Thai temple it is necessary to understand their culture and traditions. Do not ever enter a temple without following the prescribed dress code and other directions.

Though some temples may deny you entry if you’re not properly dressed, but if somewhere you’re allowed to enter, it wouldn’t be proper to do so as this might be disrespectful towards the locals and their religious sentiments. There are always signs outside the temples stating the dress code, so it won’t be difficult for anyone to figure it out. Also, always follow some important directions like- remove your shoes before entering, switch off your phones, do not smoke or snack in the temple premises, greet monks with ‘wai’, stand up when they come and do not photograph them, do not be loud. Certain other directions as stated outside the temples must also be strictly followed.

Don’t Bargain While Buying Food
Bargaining and haggling in the local street markets of Thailand is a common practice and is necessary to avoid paying for souvenirs and other things. But do not ever bargain when buying food. Food items are never overly charged and tourists should refrain from
haggling for the same.

Don’t Pet the Stray dogs
For all dog lovers it might be difficult to refrain from petting a cute dog on the streets of Thailand, but the Thai street dogs or “soi dogs” as cute and innocent as they may look should not be touched or petted by tourists. These are street dogs and aren’t pets, so they should not be treated like that.

They are used to living on the streets and getting close to them or touching them might be an invasion of their privacy. They might get irritated and aggressive towards anyone getting too close to them if they feel threatened. Respect their personal space and maintain a safe distance. Also, these street dogs might be carriers of fleas, rabies or other diseases. It is thus
safe to stay at a distance from them.

Don’t Take Taxis without Meters
Transportation within Thailand is not an issue, there are several options available to the tourists. But the most common one is taxis. But this mode of transportation is also subject to scams and cheating that are very common. Some taxi drivers tend to take advantage of unaware tourists and rip them off by charging them heavily for short distances. To avoid getting scammed so not ever travel in a taxi without a working meter or do not take a taxi if the driver refuses to charge as per the meter. This is against the law of the land. Always
look for a taxi that would charge you by the meter. Well, the above are the things you must not commit while in Thailand.

But there is a huge list of things to DO, when you are in this country. Here you go:

Do Visit the Islands
Thailand has over a thousand islands and they are all worth visiting when travelling to this country. There are numerous things that a tourist can do on their trip but most of these places may get crowded or have a lot of tourists and in such cases the islands are the perfect way to relax and have a peaceful time. Some islands have yoga resorts and meditation retreats while some even have animal sanctuaries.A trip to Thailand would be incomplete without visiting the islands. Some of the most popular ones are Phuket, Ko Lipe, Ko Samui and many others.

Do Arrange for Accommodation
When travelling to Thailand you will have an elaborate list of accommodations to choose from
and numerous activities to plan and do. It would be of great help and make your trip smoother if you plan out trip, and make your accommodation bookings beforehand. This will not only help you plan your days in Thailand accordingly but also will save your time in looking for places to stay as you explore this beautiful country. While planning, do proper research on the activities and places of your interest. While tourism has massively increased here in the last few years, it has also been commercialised. So, make sure you read reviews properly and make your choices accordingly.

Do a Bow Instead of a Handshake
While greeting, take a slight bow and join your hands (as in a prayer position). This is called a ‘wai’. There are different variations of teh ‘wai’ or bow depending on the age and status of the people. But as a general rule, it is best to just put our hands together and to just slightly bow. This can also be used to express thankfulness for someone’s service, kind act or help.

Do Return a ‘wai’
If someone greets you with a ‘wai’, always reciprocate and respond by returning the ‘wai’. It would be disrespectful to not return the gesture. But do not ‘wai’ while holding
something in your hands.

Do Remove Your Shoes and Hats in a Holly Place
Always remove your shoes and hats when entering a temple or someone’s house or place of work. This is a general convention or standard of conduct that is followed in Thailand as a gesture of respect.

Do Learn a Few Basic Thai Terms
Travelling to a foreign country can be a little intimidating if you do not know the local language or culture. This might become an issue when interacting with the locals, ordering food, seeking help and for pretty much everything else. Though Thailand is no stranger to
tourists and locals speak and interact in English, it would make your trip a little bit smoother if you know some basic terms in the local language. So, do learn some basic words in Thai like, ‘hello’, ‘excuse me’, ‘thank you’, ‘sorry’,
etc.

Always Use Your Right Hand
The Thai culture is very particular about physical interactions and they think using right hand is auspicious. Hence, it is recommended to use your right hand when paying for something or passing something to someone.

Do Ask for Permission Before Photographing the Locals
Even though the locals here are very friendly and interactive with the tourists, but Thai culture is very particular and possessive about the personal space of every being. Thus, before you photograph any locals do ask for permission politely and if they aren’t comfortable do refrain from insisting