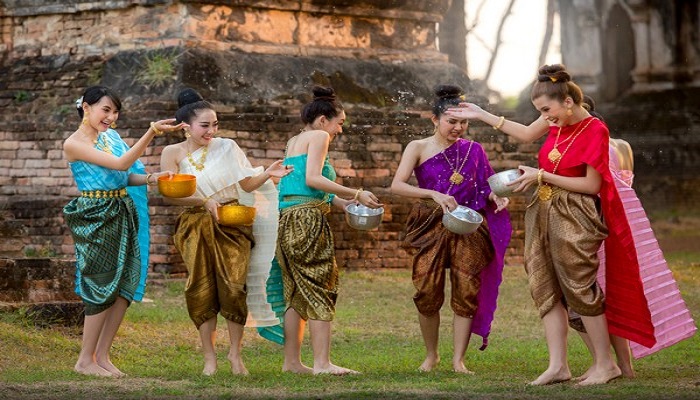 Thailand gets scores of Indian travellers throughout the year. Some come for the beaches and sea, while others for the mountains, some to find peace and some to make Thailand their permanent home. And it isn’t surprising that Thailand has so many Indians visiting. Both countries have traditions, languages, festivals and cultures rooted in the same history. This is why the largest Indian festivals and Thai festivals seem so similar. And are even celebrated in an almost similar fashion. This blend of cultures and traditions across borders is fascinating! So, here’s listing out less discovered cultural similarities between India and Thailand.

From Namaste to Sawasdee and Saree to Sbai, uncover interesting cultural similarities between India and Thailand

Ramayana and Ramakien
Just like Ramayana is India’s epic, Thailand’s national epic, Ramakien is a derivation of the Hindu epic of Ramayana. The Thai Ramakien translates to ‘Glory of Rama’ and is an adaptation with the same characters. Such as Lord Vishnu is Phra Narai and Phra Ram is Rama. Lord Rama is the son of Thao Thotsarot – King Dasharatha and Nang Kausuriya Queen Kaushalya, born in the kingdom of Ayutthaya, known in India as Ayodhya. Nang Sida is Sita, his wife and Thotsakan is Ravana, who kidnaps her. The names adapted into Ramakien too are closely similar, making it easy to identify each character from Ramayana.

Paintings and statues depicting Ramakien are on display across Thailand. Ramakien is an inspiration to the famous ‘Khon’ and ‘Lakhon’ classical Thai dances. The beautiful paintings at Bangkok’s Wat Phra Kaew (Temple of the Emerald Buddha) are all depictions from Ramakien. The plot of the epic has similarities, whereas the depictions of characters and stories vary. In both cases, Ramakien or Ramayana, the essence remains that of Phra Ram – the ideal King, husband and human.

Gods and Deities
Hinduism intertwines with Buddhism in Thai culture. Thai temples and shrines for Lord Brahma, Lord Vishnu, Lord Ganesha, Lord Indra are quite famous and a must-visit.

Hundreds of Thai’s visit the Trimurti Shrine in Bangkok in front of the Central World Plaza shopping mall. They bring offerings of nine roses, incense and candles to pray for love and happiness.

Lord Vishnu, Phra Phrom
The spread of Hinduism during the Khmer empire reign was fast and widespread across Thailand. Thus, certain regions would believe and worship specific Gods such as Lord Brahma– Phra Phrom.

Thai people believe that Phra Phrom is the creator and protector of doors and entrances. Thus, several hotels and restaurants with have small shrines at the entrance. This is to pay homage to their belief, that Lord Brahma will bring them protection and good fortune. Just like most hotels and restaurants in India have deities in their lobbies and entrances. Bangkok’s Erawan Shrine is a testament to the local Thai’s belief in Phra Phrom.

Lord Ganesha – Phra Pikanet
Thai’s have a special reverence for Lord Ganesha, which is evident across several shrines and temples dedicated to Phra Pikanet. In India, the elephant God is worshiped across the country as the remover of obstacles and bringer of good fortune. This is culturally similar to the Thai belief in Phra Pikanet.

One visit to Ganesha Park in Nakhon Nayok, and you will witness the Thai tribute to Lord Ganesha. Thai’s worship him as a patron of arts and hold Lord Ganesha with special reverence for fine arts. Thai’s also believe that Phra Pikanet protects businesses.

Lord Vishnu – Phra Narai
Hinduism also holds prominence in the Thai Royal Household. Through the Chakri dynasty, Thai’s have believed that their Kings are embodiments of Lord Vishnu. And Rama from Ramakien is his avatar, a just ruler and an ideal human. The belief of Kings as divine continued and to this day, every King in Thailand is an avatar of Rama. Like His Royal Highness, King Maha Vajiralongkorn took his formal title as King Rama X, the 10th king in the Chakri dynasty in 2019.

The Indo-Thai relationship with Buddhism
Thailand officially follows Buddhism, with 95 percent of the population following the customs, beliefs and traditions of Theravada Buddhism. This is another cultural similarity, as in India some part of the population continues to follow Buddhism. Buddhism came to Thailand around the 6th century propagated by Indian Emperor Asoka, but became more widely accepted by the 12th century.

Thai history records King Uthong’s contribution to establishing Theravada Buddhism in Ayutthaya. From meditation, to the principles of Buddhism and scriptures written in Sanskrit and Pali, Buddhism is a shared cultural significance between India and Thailand.

Thai Ceremonies with influences of Indian Rituals
Hinduism and Buddhism are widely established and accepted in Thailand. This means some traditional ceremonies in Thailand must have similarities with Indian ceremonies. And several Indian rituals and traditions influence Thai ceremonies. The Thai Royal household conducts most ceremonies with Indian priests who are fluent in Sanskrit hymns. Even the King’s coronation ceremony has several Indian influences, such as pouring of sacred water before wearing the crown.

Marriages in Thailand follow rituals of Indian marriages too. For example, the traditional Thai engagement ceremony is called mun, where the groom gifts gold to his bride-to-be. Just like traditional Indian weddings, Buddhist astrologers are consulted to set a wedding date. In traditional Thai weddings, the groom walks along with his friends and family in procession to the bride’s house, like an Indian Baraat.

Thai Festivals similar to Indian Festivals
A vast migration of traders, priests and merchants from India into Thailand means Indian customs, Sanskrit language, arts, and way of life flourished. All of this had a significant influence on the Thai way of life during this period. This cultural influence and similarity are evident even today with the festivals celebrated in Thailand. Every region in India celebrates festivals for deities, harvest, auspicious days and more. And Thai’s follow the same practice, with their abundant festivals every month, some even specific to a region.

Few of the Thai festivals bear resounding similarities with Indian festivals. Like Holi and Songkran are both festivals where water is splashed on each other. And instead of the Holi colors, a white paste of din sor pong powder is applied. Songkran is derived from the Sanskrit word ‘samkranti’ which also sounds similar to Sankranti, celebrated in India as a harvest festival.

Loy Krathong is Thailand’s festival of lights similar to Diwali, India’s festival of lights. During Loy Krathong, families come together to set afloat several baskets (krathongs) of candles and other offerings in a nearby waterway. This is a ritual done to worship the river Goddess Mae Khong Kha, symbolically Ganga.

The vegetarian festival celebrated by the Thai – Chinese community involves fasting for nine days of meat and alcohol. A similar concept followed by Indians during Navratri.

Traditional Thai Clothes similar to Indian Clothes
The Indo- Thai merger of cultures and traditions also have an effect on clothing worn. With Indian traders travelling to Thailand with cloth, and the prominence of Hinduism, a different form of Saree became popular in Thai culture.

The Jong-Graben has stark similarities with the Indian Dhoti. Silk or soft cotton cloth is wrapped around the waist and tucked in from behind to form a pant.

Thai men in the north and northeast of Thailand commonly wear the Thai Sarong called, Pa Kao Ma. Similar to the Indian lungi adorned in the South of India. Although, Pa Kao Ma is more practical and has multiple uses. Ranging from being towels to wearing a silk version on the shoulder for important occasions; the Thai Sarong is multi-functional. And is now slowly becoming a style statement in Thailand.

Thai Food draws similarities to Indian Cuisines
Thai cuisine is an amalgamation of flavors. Each dish specific to a region has influences of Laos, Burma, Cambodia, China and India. Thailand’s main cuisine is curry-based, which can be traced back to Indian Buddhist monks.

Thai cuisine is a wonderful union of salty, sweet, sour, and spicy. The key ingredients used in many dishes are similar to Indian condiments. Spices such as coriander, chili, cumin, pepper are common in most Thai and Indian cooking. The use of coconut milk in curries and fresh coconut with jaggery in desserts is another cultural similarity that is fascinating.

Thai Names derived from Indian languages
Thai language is deeply rooted in ancient Indian languages of Pali and Sanskrit. The language continues to prevail in Thailand, when you hear the monks chant in the temples. Considered auspicious, several Thai families consult with monks to name their babies. Similar to the Indian culture of naming a child with meaning, Thai’s believe the names should have some significance and meaning.

This is why you will find several Thai names as derivatives of Indian names. In the same way that Ayutthaya derives from Ayodhya, Adulya comes from Atulya, Sanchai from Sanjay, Santi from Shanti, and Niramit from Nirmita. Interesting, isn’t it?

History records the first economic and cultural transactions between India and Thailand around the 6th century BC. The first group of Indian Brahmins entered Thailand (then Siam) around the 12th century and popularized Hinduism and Indian traditions. Geographically both countries share a coastal boundary of the Andaman sea. Culturally, both countries share a common heritage, traditions, religious belief and history. From Thai architecture, sculptures to Thai drama, dance and literature, the similarities with India is astonishing. And it is this shared social interaction and cultural similarities that continue to make the Indo-Thai bond stronger.