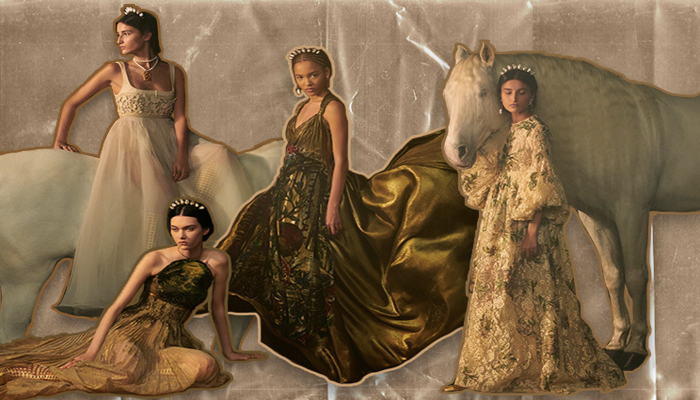 History of fashion design refers to the development of the purpose and intention behind garments, shoes and accessoires, and their design and construction. In the 19th century, the modern fashion industry and fashion houses became a concept. In the beginning of 1858, the first designer to have his label sewn into the garments he created, was Charles Frederic Worth.

We can say that “fashion” started already when humans began wearing clothes. In the beginning clothes were mainly made of plants, animal skins and bone. Before the mid 19th century the division between “haute couture” and “ready to wear” not really existed.

At this time most clothes were made by dressmakers dealing directly with the clients. Most clothes were sewn in the household. Paris early became the influencer and especially Paris and in the 1780s magazines started to illustrating the latest Paris styles. One of the earliest known fashion magazine was “Cabinet des Modes”.

During the early 18th-century, the first fashion designers came to fore as the leaders of fashion. Rose Bertin is generally regarded as the very first internationally fashion designer. Rose Bertin was dressing Marie Antoinette, the queen of France during 1770 until 1793. Rose opened a shop in Paris and managed it until the French Revolution forced her to give up and go into exile in London.

British Charles Frederic Worth lived in Paris (1825-1905) and is seen as the first designer in the modern sense of the term. He managed a large business wih many tailors and seamstresses employed. He was, at that time, dictating what customers should wear. He often used his royal connections to gain recognition and clients.

Worth was well known for his fashionable“crinolines”. GOLDEN AGE OF FRENCH FASHION is often considered to be between the two world wars. Haute Couture found new customers in the ranks of film actresses, American heiresses and wives and daughters of wealthy businessmen.

Many things changed in fashion after the First World War. The short “bob” became a popular hairstyle and dresses with long trains gave way for above-the-knee pinafores. Women stopped wearing corsets and many women borrowed clothes from their men, choosing to dress in a male style. From 1925 the couturiers adopted and embraced the new “androgynous” style. The “garconne” look was born.

One of the greatest couturiers was Mme. Coco Chanel. She was well known for her personality and her chic and progressive designs. She introduced the “little black dress” and the jersey fabric for women’s clothing. She also elevated the status of costume jewelry and knitwear. Many more designers followed like Jeanne Lanvin and Jean Patou to mention justa few.

In 1930s the people started to feel the effects of the “Great Depression” and many designers found that crises were not the right time for exprementation. Overall the 1930s clothing was somber and modest reflecting the difficult economic situation.

The fashion for outdoor activities stimulatedcouturiers to design and manufacture what we today call “sportsewar”. The term “Ready -to- wear” was not yet in use. The two most influential designers in 1930s were Elsa Schaparelli and Madeleine Vionnet.

In 1929 Elsa presented her first collection and was hailed by the press as a real rare innovators’s of the da Elsa Schiaparelly was befriended with the artist Salvador Dali, Jean Cocteau and Christian Berard. These men all contributed to make her collections
interesting and special. Madeleine Vionnet was inspired by the ancient time. She created timeless and beautiful gowns.

Her perfect draping of chiffon, silk and crepe created a sensual effect and made most women look feminine and sensual.

After World War II, Paris’s reputation as the global center of fashion began to crumble. A new younger style emerged. The new young generation wanted to reap the benefits of a booming consumer society.

Europe became ready to adopt quality ready-to-wear garments along American lines. The increases in overhead and raw material costs, were beginning to relegate handmade fashion to the sidelines. In 1940s many fashion houses had to close during the occupation of Paris during “World War II”. Several designers relocated to New York.

The Vichy regime promoted the model of the wife and mother. Germany took posession of over half of what France had produced, including high fashion and considered to relocate French Haute Couture to Berlin and Vienna.

Haute Couture was said survive due to the patronage of the wives of wealthy Nazis. Due to Paris’s isolated situation in the 1940s Americans were enable to utilize the creativity of their own designers. Claire McCardell, Bonnie Cashin and Ann Klein formed a remarkable trio of women who laid the foundations of American sportswear and ready-to-wear.

Many at that time popular actresses, including Katharine Hepburn, Rita Hayworth and Marlene Dietrich, had a significant impact on popular fashion.

In 1947 Christian Dior introduced his first collection containing dresses with accentuated busts, wasp waists and full skirts, a style similar to the Belle Epoue. His design incited the powerful editor of the American Harper’s Bazaar to exclaim “This is the new look Throughout the 1950s, women around the world continued to the trends of Parisian haute couture and three of the most prominent couturiers of the time were Cristobal Balenciaga, Pierre Balmain and Hubert de Givenchy.

Many of these changes in fashion developed the streets of London with gifted designers such as Mary Quant, who launchd the mini skirt and Barbara Huanicki, founder of the legendary boutique BIBA. Famous influential celebrities during the 1960s were Audrey Hepburn, Jackie Kennedy and models like Twiggy, Veruschka and Jean Shrimpton. In 1963 the bikini finally came into fashion.1970s is nick named the “me decade”. Some people saw this years as the end of good taste. The hippie look with kaftans, Indian scarves and floral printed tuniques was in favor.

After 1975, fashions came to be dominated by the “disco look”. Two of the probably most innovative fashion designers in the 1970s were Kenzo Takada and Sonia Rykiel. Kenzo drew his inspiration from all over the world, mixing Oriental folk influences, Western with a “joi de vivre”. The Rykiel style was dominated by fluid knitted garments. Sonia Rykiel is considered by many as the true successor of Coco Chanel.

During the 1980s jumpsuits became popular and aerobics was in voque and brought into style Spandex leggings and headbands. French designers like Thierry Mugler and Azzedine Alaia became most popular. Claude Montana introduced the broad-shouldered design and made leather popular and Christian Lacroix sent chock waves through the world of haute couture, with his flounced skirts, corselets and polka-dotted crinolines.

In America, Donna Karan and Ralph Lauren were very infuential. Shoe designer Manolo Blahnik also rose to fame during the1980s. Donna Karan sat up her own label in 1984 and won immediately popularity among active, urban women. In 1971 Ralph Lauren opened a boutique for both men and women in Beverly Hills.

In 1990s fashion united around a new standard, “minimalism”, stark simplicity became the vogue. The financial pressures of the decade had a devastating effect on the development of new talents.

In the 1980s there was a dramatic move away from the sexy styles aimed at the glamorous “femme fatale” of the time. Clothes by ready-to-wear retailers such as The Gap, Banana Republic and Eddie Bauer came to the forefront of fashion, understanding that women simply wanted comfortable clothes. Retro clothing became popular.

In 1921, the Italian fashion house Gucci was created by Guccio Gucci. The name was orginally known for luxury leather goods. Under Guccio Gucci’s children, end of 1960, the label expanded to include a pethora of products with a Latin glamor. In 1994 the relatively unknown designer Tom Ford was employed as a fashion director and the house became endowed with great prestige. In 1998 Gucci was named “European Company of the year” by the European Press Federation. In the 1990s the label PRADA became a true force in the fashion industry.

This Milanese company was first established in 1923. It was until the 1980s that Miuccia Prada, the niece of the compnay’s founder, began to produce ready-to-wear fashion, before the
company had sold high-quality shoes. In the US the three most influential designers of the time were Michael Kors, Marc Jacobs and Calvin Clain.

In Italy, Gianni Versace, with his sexy and colorful designs, and Dolce & Gabbana, with their superfemenine and fantastical style, broke away from the serious and sober-minded fashions that were dominating the 1990s.

The sports label NIKE had hugh popularity and materials like Lycra/Spandex were increasingly used for sportswear. Designers increased awareness of animal rights and made even top couture houses such as Chanel introducing fake fur and natural fibers into their collections.
Today, fashion has become even more sustainable.

Young designers are re using materials, even searching for other sustainable alternatives and returning to there it all began, with plants, paper etc. In the most exclusive shopping mall NK, in the Swedish city Gothenburg, young designers have created garments like Renaissancing Diagonally by Mikaela Mårtensson, using paper material that is in some contexts considered basic and unsophicated, however designers and artists often approach the well-known material and explore the expressional value of paper craft, by Sisse Bjerre.

One designer, Märta Wallgren, has investigated alternative weaving looms to challenge traditional form of weave with focus on up-cycling. A Seat at the Table by Josefine Neumann represent a nostalgic up cycling through storytelling.
Fashion is here to stay, but in new ways!