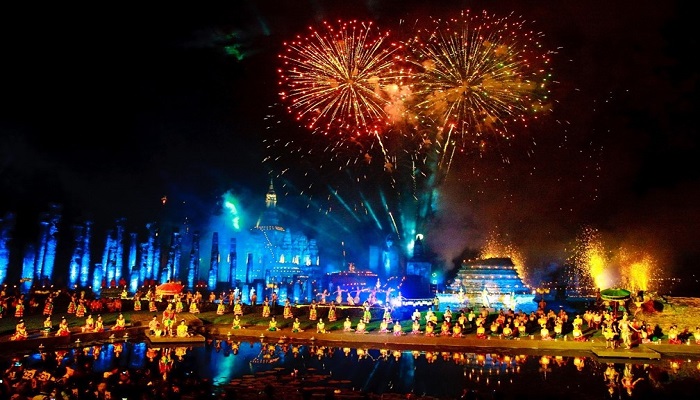 Loy Krathong Festival is one of the major highlights of the Thai festival calendar. The annual festival is also known as Thailand’s Festival of Lights and involves making or buying a decorated basket (krathong) and floating it down the river to release all the negativity from the previous year.

Here are 15 interesting facts that you probably didn’t know about the Loy Krathong Festival.

The Krathong carries away bad energy

During the releasing ritual, a wish is made by the person carrying the krathong before it’s released to float down the river. The krathong is said to carry away any bad energy and signal a fresh start for the year ahead.

Each part of the krathong is an important symbol in Buddhism. The candle represents knowledge and wisdom, the incense represents purity, the flowers symbolize the honor shown to monks, and the coins are an offering made to the spirits and ancestors.

A snip of hair or fingernails can be used to represent negative memories and a few coins are included as an offering to the great water goddess, Pra Mae Khongkhathen. Many Thais believe that if a Krathong capsizes, it means bad luck for the person who released it.

Water is symbolically important in Buddhist culture and is believed to have powerful cleansing and life-giving properties. Loy Krathong Festival takes place right after Thailand’s monsoons and the floating lanterns are a way to give thanks to the water goddess for giving the people enough water and rain for the year. It is also a way to ask for forgiveness for using too much water or contaminating it.

While the exact origins of the Loy Krathong Festival remain unclear, it is said that the festival started in the old Thai capital of Sukhothai (located about five hours north of Bangkok.) during the period of the Sukhothai Kingdom.

In the 13th or 14th century, Nang Noppamas, a beautiful companion of the king of Sukhothai, is said to havemade the first krathong. King Ramkhamhaeng was so impressed by the beauty of Nang Noppamas and the floating krathong that he made the ritual into an annual tradition.

Noppamas is still remembered to this day at the Loy Krathong celebrations through krathong beauty pageants that are held in various locations around Thailand.

Now Sukhothai is still a great place to experience this festival with rich celebrations such as a beauty contest, parades, folk music performances, and the gorgeous Sukhothai light and sound show.

While the story of Nang Noppamas is the most common legend behind Loy Krathong, many people also believe that the festival began with influences from the Hindu festival Diwali(the Festival of Lights in India). In this story, krathongs are released on rivers to honor the footprint of Buddha that was left near a holy river in India upon his return to the heavens and freedom from the cycle of death and rebirth.

The date of the Loy krathong Festival changes every year

Loy Krathong takes place on the evening of the full moon of the 12th month in the traditional Thai lunar calendar and the exact date of the festival changes each year. When following the Western calendar, this festival usually falls in November. In 2021, the Loy Krathong Festival will be on November 19th.

The celebrations of Loy Krathong last for 3-5 days

Although the mass release of krathong takes place on the evening of Loy Krathong Day (November 19th, 2021), the celebrations go on for several days in many places, such as usually 3 days in Bangkok and Chiang Mai, and 5 days in Sukhothai. Light shows, traditional dancing, and concerts are being held daily.

Loy Krathong Festival is celebrated across Thailand and some nearby countries.

Many people consider Sukhothai to be a more beautiful and peaceful destination for festival celebrations. A large Loy Krathong event is held in the Sukhothai Historical Park every year with plenty of cultural performances and celebrations that last up to a week.

Loy Krathong celebrations are also great in Bangkok and Phuket
If you want to experience Loy Krathong in Thailand, but don’t have enough time to fly to Sukhothai or Chiang Mai, then Bangkok is a good choice. In Bangkok, the release of Krathongs occurs on the Chao Praya River and a great way to experience the festival is to take a dinner cruise and release your own krathong from the boat. Click to see 5 Best Places to Celebrate Loy Krathong Festival in Bangkok.

If you want to experience Loy Krathong without the crowds and while relaxing on the beach, then Phuket is a great place for a beach vacation and a chance to release a krathong into the ocean.

Loy Krathong is regarded as a version of Valentine’s Day in Thailand
For young romantics and new couples, Loy Krathong is a time to wish for future happiness and success in love. For centuries, it has been a festival where Thais believe they will meet their soulmates. Many couples make their Krathongs together or choose to buy one that they both like.

During the festival, couples will light candles and incense then release the Krathong and watch it together as it floats away. If the candle stays lit until the Krathong is out of sight, then the couple will know that their love will stand the test of time.

Anyone can participate in Loy Krathong Festival!
People of all ages come together to celebrate Loy Krathong and Yi Peng Festivals. With the cooler weather in November, it’s the perfect festival for the kids to enjoy without getting too hot. Many resorts have activities for children around Loy Krathong including learning to make Krathongs, face painting, and learning local traditional dances.

Alcohol is also not allowed at the events
While most bars and hotels will be served alcohol during the festival. But not when you are attending a mass release show. Alcohol inside the event is a no-no!